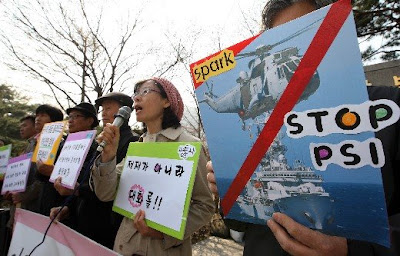 * Image source/ caption*
same as below

'Members of Solidarity for Peace and Reunification of Korea staged a demonstration to urge the South Korea government to engage in dialogue with North Korea and to not participate in the Proliferation Security Initiative, in front of the Ministry of Foreign Affairs and Trade building in Seoul, April 6.'

Lee Myung-bak administration’s treatment of North Korea issues before and after North Korea’s missile launch on April 5 has lost its consistency. It has issued a mixture of both moderate and hard-line declarations from being prepared to send a special emissary to Pyongyang to planning to go ahead with full participation in the U.S.-led Proliferation Security Initiative (PSI).

On April 3, President Lee said his administration “is ready to send an emissary when necessary.” On April 6, however, after the rocket launch, he said something else. “The question of participating in the Proliferation Security Initiative is being actively considered in the context of international cooperation on the prevention of the spread of weapons of mass destruction (WMD), and we are pursuing full participation based on our own decision,” Lee said, indicating a turn in a hard-line direction. Put simply, he is all over the place.

Perhaps because of the inconsistency in political positions, one senses confusion within his administration about PSI. On April 6 a Cheong Wa Dae (the presidential office in South Korea or Blue House) official said full participation had already been decided. “Our participation in PSI will happen after a response to North Korea’s rocket launch is decided at the United Nations, and will not have to wait beyond April.” In other words, the administration has indicated it will announce its intention to fully participate in PSI right after the United Nations Security Council concludes an agreement about North Korea’s rocket launch.

Another Cheong Wa Dae official said there “might be various differing strategic and tactical decisions in regards to the timing” of the announcement regarding participation. The administration “is watching for the best timing.” In other words, the government is going to wait on when to make its announcement regarding its decision.

Whether a decision has been made, however, also seems to be the subject of some internal inconsistency in the administration. Yet another Cheong Wa Dae official said the “mood is one in which there is prudent consideration for whether or not to participate.” An official in one of the government’s ministries responsible for security and foreign policy said it “is not easy deciding about PSI because of issues like inter-Korean relations and Seoul’s relations with China.”

Such confusion within the government relates to the negative influence participation in PSI would have on both inter-Korean relations and the political situation on the Korean peninsula. President Lee and other high-raking administration officials insist PSI is about cooperating with the international community’s efforts to stop proliferation and is not something that targets North Korea, but many refute that.

Democratic Party Assemblyman Song Min-soon, who served as chief security secretary in the Cheong Wa Dae of the previous administration and as its minister of foreign affairs and trade, said that if South Korea fully participations in PSI, “key to that will be WMD interdiction training with other countries in the seas surrounding the Korean peninsula.” Song added, “The target inevitably has to be North Korea.”