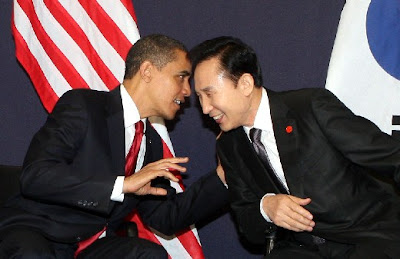 * Image Source/ caption*
Same article as below
"The US President Barack Obama whisper to South Korea President Lee Myung-bak, right during their summit in London on April 2."


"the US President Barack Obama whisper to South Korea President Lee Myung-bak, right during their summit in London on April 2."

South Korean President Lee Myung-bak and United States President Barack Obama held their first summit Thursday (on the sidelines of the G-20 summit) in London. While the imminent North Korean rocket launch remains a pressing issue, this brief meeting was characterized by rather basic diplomatic rhetoric such as “close cooperation,” “sympathies” and “reconfirm.”

Some analysts are also asking whether too little of substance was gained through this meeting, lasting only 30 minutes. While they may not be apt comparisons, the U.S.-China summit Wednesday saw the launching of a new channel for dialogue that represents a step up from the existing strategic discussion between the two countries, and the U.S.-Russia summit saw progress on an agreement on nuclear arms reduction and discussions to replace the current Strategic Arms Reduction Treaty (START-I), which expires in December.

In contrast, the South Korea-U.S. meeting saw an exchange of opinions on a broad range of topics, including: the rocket launch, the North Korean nuclear issue, the strengthening of the South Korea-U.S. alliance, plans for cooperation to overcome the global economic crisis, climate change, and support for the reconstruction of Afghanistan.

Analysts reviewing the proceedings of the first summit suggest the two leaders did not appear to offer any differences of opinion on the South Korea-U.S. free trade agreement, which has recently been the most contentious issue between the two countries, nor any points of agreement either.


Any agreement on another major issue, the North Korean rocket launch, was condensed into statements about the need for the international community to participate in a “stern, united response.” Analysts also suggest the choice of the term “stern” reflects an intention to take measures based on a shared understanding that any launch by North Korea would represent a violation of United National Security Council Resolution 1718.

But the reference to a “united response,” while demonstrating coordination between South Korea and the U.S., was also somewhat carefully chosen. Some experts suggest that it may indicate an intention to show consideration for the positions of China and Russia, which have responded negatively to the idea of adopting UN Security Council resolutions, such as sanctions against North Korea. Indeed, the U.S. has repeatedly stated that the doors are open for discussion. Judging from the positions recently taken by China and Russia, analysts are expecting discussions to proceed within a larger framework following the rocket launch, even if the matter goes to the UN Security Council.

Please direct questions or comments to [englishhani@hani.co.kr]
© 2006 The Hankyoreh Media Company.
Posted by NO Base Stories of Korea at 10:35 AM