Text Fwd: FIGHTING TO SAVE THEIR FARMS 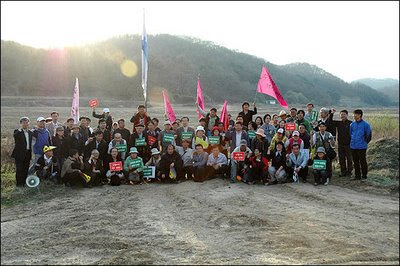 Citizens of Mugeonri fight to save their farm land

Yesterday 20 of the remaining GN's international delegation took a two-hour bus ride to Mugeonri which is just 36 kilometers from the North Korean border. At this place the US Army has been displacing this rice growing community from their lands since 1980. But they want still more land. High-tech weapons systems demand larger areas to practice.

The remaining two hundred people in this beautiful place, surrounded by hills, are fighting hard to hang on to the last of their lands. But the Army will not be denied as they want to expand their existing military training area (mostly for tank and Bradley fighting vehicle training) by some 30 square kilometers more. So they are saying the people most go.

The roads for miles are lined with yellow banners proclaiming their message - "We want to live in our hometown." The people have lived on this land for more than 400 years.

We were taken to a place near their village which is a nesting area for white cranes, the symbol of their resistance. Over 1,000 cranes used to nest there but now their numbers have dropped to about 100 as the Army destroys the land.

We also visited the site where two 15-year old girls, walking to a friends birthday party, were run over and killed by US tanks on the narrow country road in 2002. No one was ever held responsible for their deaths which further outraged the nation.

The US Army is practicing for an invasion of North Korea. The villagers, because they are so close to the border, have many relatives in the nearby north. One of their leaders told us that the US is "Threatening not only our livelihood but also peace on the Korean peninsula and in the Asian-Pacific region."

The Pentagon's OPLAN-5027 spells out the strategy of military action against and control of North Korea.

So the people have a doubly hard task at hand. They have to save their farms and their homes but also try to stop the US from invading the north and killing their relatives. The thought that the US is training to kill their relatives on their own farm lands is just too heartbreaking for them to believe.

I am writing from the Seoul airport as we prepare to head home. We fly first to Tokyo, then to Chicago, and finally to Portland, Maine. We got out of bed at 4:30 am this morning to make the two-hour trip to the airport. Mary Beth has been sick in bed for the past three days and missed two of our three field trips. Luckily she was still able to deliver her speech at the conference. Tom Sturtevant is doing well and having a grand time.

It was an incredible experience, and the three field trips we took were bonding experiences for all of us. We produced an excellent statement coming out of the conference and you can see it here.

The memory of the people of Mugeonri is now branded on our hearts.
Posted by NO Base Stories of Korea at 10:11 AM