At the end of the formal conference 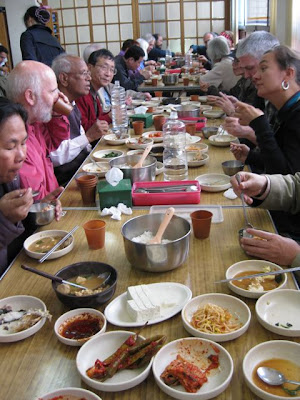 One of our meals 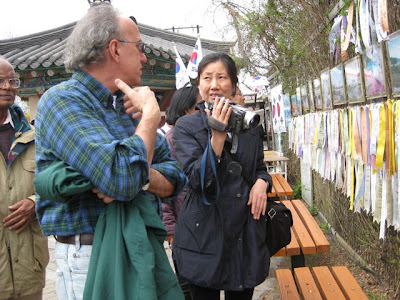 Speaking with Sung-Hee Choi at the DMZ 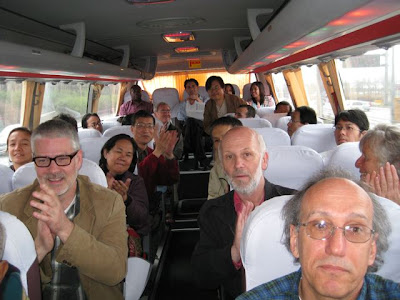 On one of our three field trips

We got home last night at midnight from a more than 24-hour return trip. It's a long slog back. We slept for 12 hours and I am still in bed with my laptop. Its cold and raining outside, I might not get up at all today.
I'm fasting today in solidarity with the climate change movement's call for Congressional action. Some folks, like friend Ted Glick, are going to fast for a couple of weeks.
I've already had two emails from Japan this morning. The largest delegation at our conference in Seoul was the twenty people from Japan. Our long-time board member Atsushi Fujioka, from Kyoto, organized them to come. We added three new Japanese folks to our Global Network advisory committee. There is some interest in having me come to Japan in August for the annual conferences in Hiroshima and Nagasaki and then a tour around the country. Will have to see if it all works out or not.
We must thank our dear friend Sung-Hee Choi from Inchon, South Korea for having put out this whole idea of the Global Network conference in her country. She pressed for this last year when we met in Nebraska and was instrumental in pushing it through. She had major help from Haeng-Woo Lee who lives in New Jersey and was the founder of the National Association of Korean-Americans. Haeng-Woo wanted so badly for more people around the world to deeply understand the current dangers on the Korean peninsula and to help advocate for a peaceful reunification of Korea. His support was vital to the success of the conference.
I don't think I will do much today. I need a day off to just be lazy. It's good to be home again but part of my heart remains in Korea. As it turn out my birthday, July 27, was the day the ceasefire was signed to end the shooting in the Korean war. But the war still remains on as the US digs militarily deeper into the divided country. We should all remember this important fact and help press for true peace which can only come when US bases there close down. Once more we have to say - bring the troops home now.
Posted by NO Base Stories of Korea at 10:44 AM