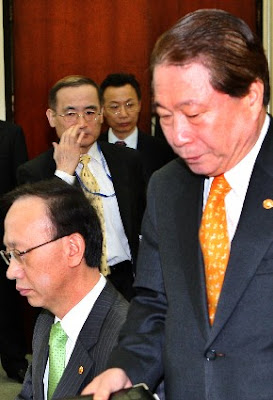 South Korean Prime Minister Han Seung-soo told the National Assembly on April 6, “It’s time for defense and diplomatic authorities to seriously review the issue of revising the South Korea-U.S. missile guidelines.” Remarks made by Han over the need to redraw the South Korea-U.S. missile guidelines are drawing attention, especially as conservative politicians and organizations have raised the topic of South Korea’s missile sovereignty intermittently in the past.

The South Korea-U.S. missile guidelines emerged from an agreement made in the 1970s when the late South Korean president Park Chung-hee attempted to develop long-range missile technology as part of a “self-defense” initiative. At that time, the U.S. restricted South Korea’s missile development range to 180 kilometers.

When North Korea fired off the Kwangmyongsong-1 (or Lodestar) satellite in August 1998, public opinion swirled in South Korea around the idea of developing its own long-range missile. South Korea and the U.S. eventually came to an agreement to extend the permitted range of its missile capacity to 300 kilometers. South Korea then notified Japan, China and North Korea of the new guidelines and became the 33rd member of the Missile Technology Control Regime (MTCR) in March 2001.

In the past, in lieu of developing ballistic missiles that are restricted by the MTCR, South Korea developed cruise missiles, which do not share the same range restrictions, and positioned them within striking distance of North Korea. Currently, South Korea possesses the Hyunmu-3 cruise missile that has a range of 1,500 kilometers.

Extending the permitted range of South Korea’s ballistic missiles requires reconsideration of the South Korea-U.S. missile guidelines and membership in MTCR. If it does so, analysts anticipate a clash with the U.S., which seeks to limit missile proliferation worldwide. For President Lee Myung-bak’s administration, which boasts warmer ties with the U.S. as one of his key achievements, it will not be an easy choice. Some analysts suggest the need for a cautious approach by the administration because increasing missile capacity could spark an arms race with Japan and other neighboring nations.

Jeong Wook-shik, a representative of the Peace Network, a civic organization for peace research, said, “The confrontation regarding the missile arsenal on the Korean Peninsula is not just between South and North Korea, but is rather a confrontation between South Korea, the U.S. and North Korea.” Jeong also said, “Given the missile defense capability of the U.S., the argument that the South-North missile balance has collapsed isn’t true.”

© 2006 The Hankyoreh Media Company. All rights reserved.
Posted by NO Base Stories of Korea at 11:38 PM