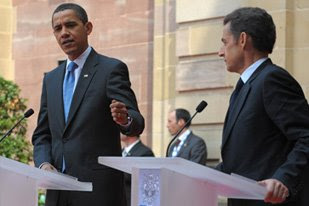 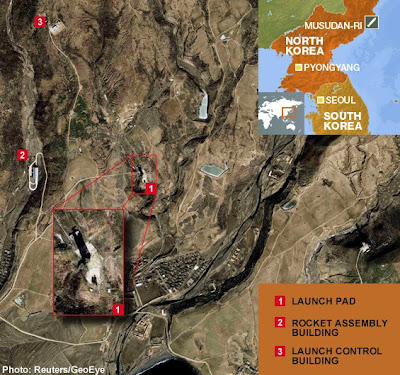 * Text informed in the Informationclearing House*

_North Korea says it launched its first satellite, Kwangmyongsong-1 (right), into orbit aboard a Taepodong 1 rocket in 1998 _It says the satellite launch was successful, beaming a looped recording of the Song of General Kim Il Sung back to Earth _US space command said at the time it was unable to find any North Korean satellite in orbit _North Korea says it is now preparing to launch the Kwangmyongsong-2 satellite on top of what it has called an Unha-2 rocket

North Korea has said its preparations for the launch of a communications satellite into space are complete and that the lift-off is imminent.

Pyonyang reaffirmed its intention to see through the controversial launch, despite mounting international pressure to call it off.

"Preparations for launching 'Kwangmyongsong-2,' an experimental communications satellite, by carrier rocket 'Unha-2' have been completed at the satellite launching ground in the east coastal area," the state-run Korean Central News Agency reported, citing information from the Korean Committee of Space Technology.

"The satellite will be launched soon."

The Japanese government said on Saturday that North Korea had launched the rocket but later retracted the news, blaming a faulty detection device for the erroneous information.

The launch, which North Korea had earlier said was scheduled for some time between April 4 and April 8, has sparked alarm because Pyonyang has acknowledged it has nuclear weapons.

"They have been one that really have been putting all the plans in place, in terms of military hardware. They have really been on edge. They have plenty of land-to-air batteries in place around Tokyo and other parts of the country.

"The rocket [if it is fired] will fly over Japense territory so they have a right to be nervous. The North Koreans have assured Tokyo that the launch is for peaceful purposes but the Japanese are fearful."

Washington, Seoul and Tokyo suspect North Korea's real motive in the launch is to test its long-range missile technology.

The US, Japan and South Korea have all deployed warships with radar and other surveillance equipment in the waters near North Korea ahead of the launch.

On Friday, Barack Obama, the US president, warned of international action against North Korea if it goes ahead with the launch.

"Should North Korea decide to take this action, we will work with all interested partners in the international community to take appropriate steps to let North Korea know that they cannot threaten the safety and stability of other countries with impunity," Obama said.

Pyongyang has said that the rocket is carrying a satellite as part of a peaceful space programme.

But the South Korean and Japanese governments allege that North Korea is using the launch to test its Taepodong-2 long-range missile, which is capable of reaching the US.

Pyongyang fired a Taepodong-2 in a July 2006 test session but it exploded shortly after launch. It conducted a nuclear weapons test, its only one to date, in October 2006.

But China, which has a veto in the UN Security Council and which has close ties to Pyongyang, is likely to oppose fresh sanctions, as well as the tightening of existing ones against North Korea.

Japan, South Korea and the US have said they do not intend to shoot down the rocket unless it heads towards their respective territories.

North Korea has said that any attempt to destroy the missile will be considered an act of war and that it could restart a plant making arms-grade plutonium if the UN imposes fresh restrictions.
Posted by NO Base Stories of Korea at 9:59 AM