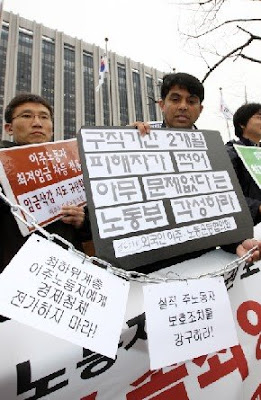 *Image Source/ Caption *
Same as the article below

“Migrant workers hold a demonstration in front of a government complex building in Seoul to urge the government to guarantee their rights, March 3.”

http://english.hani.co.kr/arti/english_edition/e_national/348882.html
Small business advances on exploitation of migrant workers: Korea Federation of Small & Medium Business’s propose to take away 20 percent of workers’ wages for providing room and board. 2009-04-09, 12:21:40 pm

Foreign workers, labor and civic groups say they plan to fight Korea Federation of Small & Medium Business’s (Kbiz) recently announced “Standards for Charging Foreign Laborers for Board and Lodging.” The new standards outline how companies that employ migrant workers are only obligated to pay minimum wage and not to provide room and board.

The Association for Migrant Workers, the Network for Migrant Workers, and 35 other labor, human rights, and civic organizations have joined together in the umbrella organization Joint Committee for Migrant Workers in Korea(JCMK) met in front of the Kbiz offices in Seoul’s Yeouido neighborhood on April 8 and read a statement saying that migrant workers “are already receiving minimum wage or less” and that it is “abusing its authority to speak on behalf of employers to say companies shouldn‘t provide for board and lodging.”

Kbiz sent member companies the statement of new standards on March 27. Specifically, it calls on companies to charge 20 percent of workers’ wages, approximately 180,000 won, if they are also providing a room and two meals a day. This would mean migrant workers receiving room and board would receive a reduction to 723,200 won a month in wages, based on a 44-hour workweek, compared to the current 904,000 won.

Article 6 of the current Minimum Wage Act stipulates that employers may give pay that exceeds minimum wage, but that the extra amount cannot then be calculated into what is reporting at the end of the month as its minimum wage pay. The basis for that part of the law is the belief that benefits for workers, including physical goods such as room and board, are unrelated to wages. “These ‘standards’ violate the Minimum Wage Act,” said labor law expert Yun Seon-ho. “Proposing that foreign workers not be given room and board also violates the ‘Law on the Hiring of Foreign Workers,’ which prohibits discrimination against foreign laborers.”

Yi Yeong of the Joint Committee for Migrant Workers in Korea said it “looks like the Korea Federation of Small and Medium Business is trying to make the idea of charging foreign workers for room and board well-known in anticipation that the ruling Grand National Party will pass its proposal to amend the Minimum Wage Act.”