Text Fwd: REFLECTIONS ON THE OBAMA TRIP TO EUROPE 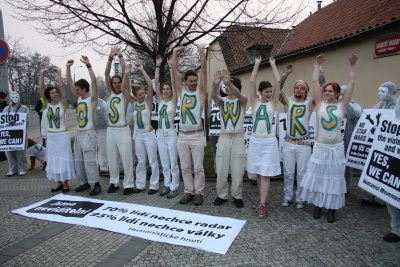 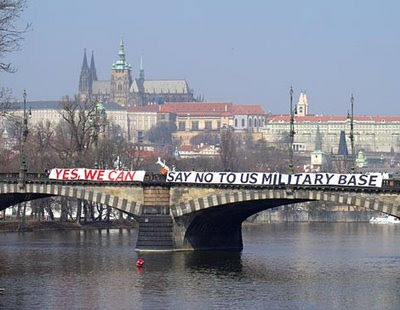 * Image Source*
Same as the article below
Prague, Czech Republic

http://space4peace.blogspot.com/2009/04/reflections-on-obama-trip-to-europe.html
Sunday, April 05, 2009 REFLECTIONS ON THE OBAMA TRIP TO EUROPE

A friend wrote this morning, "The headline should read - Obama talks peace and plans for war."

Then in Prague Obama called for the world to get rid of its nuclear weapons. Very commendable.

The Washington Post reported this morning that, "For those worried about a unilateral American disarmament, Obama promised that the country would keep enough nuclear weapons to defend itself and its allies as long as the weapons existed in other nations....He also reiterated his pledge to install a missile defense system in Eastern Europe as long as Iran poses a possible nuclear threat to the region."

Iran? We know Iran is no threat and scientists have long been telling us that Star Wars bases in Poland and the Czech Republic would not be capable of intercepting missiles from Iran....but they could intercept missiles from Russia.......

So the crucial message was delivered.....Star Wars technology will still likely be developed and put into Poland and the Czech Republic, using Iran as the excuse to cover larger US ambitions of surrounding Russia with the technology.

* Some years ago Gen. Charles Horner (the former commander of the US Space Command) became an advocate for getting rid of US nuclear weapons. His rationale was that they were an "outdated military technology" that would never be used thus wasting alot of money that could be put into other kinds of useable new weapons systems like Star Wars.

* The US has a public relations problem as we lecture Iran and North Korea about the evils of nukes but we have plenty of our own. So to regain some semblance of credibility around the globe the US has to show some movement. This is why Henry Kissinger became a proponent of getting rid of nukes.

* US strategy to surround Russia and China with "missile defense" systems only works if you first get those countries to get rid of a bunch of their nukes thus lessening their ability to have a "robust deterrent capability" after they are hit with the US first-strike system now under development. And it is obvious from Obama's words in Prague that he intends to continue developing the "missile defense" system that Bush proposed to deploy in Poland and the Czech Republic. According to French media, " U.S. President Barack Obama reassured Warsaw over concerns that Washington might scrap a planned missile base in Poland which has angered Russia, Polish President Lech Kaczynski said Saturday."

* I worked on Jimmy Carter's successful campaign in 1976 largely because he said over and over again that "the nuclear arms race was a disgrace to the human race." Also very commendable. Then as president Mr. Carter proceeded to build the Kings Bay Naval submarine base in St. Marys, Georgia for the Trident II nuclear system.

* So I've been somewhat tempered by promises from politicians over the years. I now listen for the nuances in their language.....things like this from Obama in Prague, "This goal will not be reached quickly -- perhaps not in my lifetime. It will take patience and persistence." And it certainly won't be reached in President Obama's lifetime if he insists on moving forward with Star Wars and "missile defense" systems - especially deployed upon Russia and China's doorstep. Let's face the facts here, Obama is not a stupid man. He understands that these space technology systems very well could be show stoppers. With that in mind, then why would he still pursue them?

In the end the question remains how much will really change? Obama is doing an effective job of "changing the tone" and showing "humility" on the world stage as a way of atoning for Bush's more hard-edged bad cowboy talk. But at the same time Obama is skillfully revealing that he has the ability to repackage US empire building policies in a new kinder and gentler way, but still achieving the same results. One Brookings Institution analyst told the Washington Post, "the 'hard edge of policy' in Iran, Afghanistan, Iraq and the Israeli-Palestinian conflict, where unlike some European allies Obama has not signaled a willingness to talk to the armed Islamist group Hamas, the president's policy and goals have not changed much from those of his predecessor."

So for me this is what I am watching and trying to interpret - yes I see the rebranding of the product going on, but I am also watching the actions that follow the nice talk.

In words that Mr. Obama would understand, I am keeping my eyes on the bouncing basketball.

http://nobasestorieskorea.blogspot.com/2009/04/against-move-for-un-security-council.html
Sunday, April 5, 2009 Against the Move for the U.N. Security Council Sanction against the North Korea: Revealing Obama’s manipulation

http://nobasestorieskorea.blogspot.com/2009/04/video-and-text-fwd.html
Saturday, April 4, 2009 Video and Text fwd: CZECH MESSAGE TO OBAMA
Posted by NO Base Stories of Korea at 8:35 AM