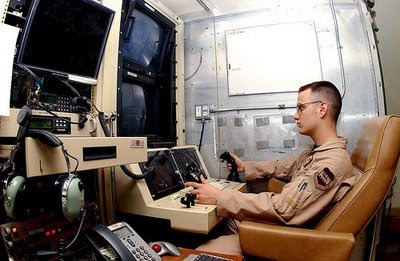 It’s one thing to study online articles describing the MQ-9 Reapers and MQ-1 Predators. It’s quite another to identify these drones as they take off from runways at Nevada’s Creech Air Force base, where our “Ground the Drones…Lest We Reap the Whirlwind” campaign is holding a ten-day vigil.

This morning, during a one hour walk from Cactus Springs, Nevada, where we are housed, to the gates of Creech Air Force base, we saw the Predator and Reaper drones glide into the skies, once every two minutes. We could easily distinguish the Predator from the Reaper, - if the tailfins are up, it’s a Predator, tail fins down, a Reaper.

The MQ-1 Predator and MQ-9 Reaper drones both function to collect information through surveillance; both can carry weapons. The MQ9 Reaper drone, which the USAF refers to as a “hunter-killer” vehicle, can carry two 500 pound bombs as well as several Hellfire missiles.

Creech Air Force Base is headquarters for coordinating the latest high tech weapons that use unmanned aerial systems (UASs) for surveillance and increasingly lethal attacks in Pakistan, Afghanistan and Iraq. The Unmanned Aerial Vehicles, (UAVs), take off from runways in the country of origin, controlled by a pilot, nearby, “on the ground.” But once many of the UAVs are airborne, teams inside trailers at Creech Air Force base and other U. S. sites begin to control them.

We’ve become more skilled in spotting and hearing the vehicles.

But, we want to acknowledge that Creech Air Force base pilots guiding surveillance missions over areas of Pakistan and Afghanistan, where they are ordered to hunt down Taliban fighters, are absorbing and processing information which we wish they could disclose to us. Trainers at the base have arranged for a contractor to hire “extras” to pose as insurgents, walking about the range inside the base, so that pilots training for combat can practice shooting them. This is all done by simulation. Sometimes flares are set up to simulate plumes of smoke representing pretended battle scenes. But when the pilots fly drones over actual land in Pakistan and Afghanistan, they can see faces; they can gain a sense for the terrain and study the infrastructure. A drone’s camera can show them pictures of everyday life in a region most of us never think much about.

We should be thinking about the cares and concerns of people who have been enduring steady attacks, displacement, economic stress, and, amongst the most impoverished, insufficient supplies of food, water and medicine.

The Pentagon stated, today, that the situation in Pakistan is dire. We agree. Pakistanis have faced dire shortages of goods needed to sustain basic human rights. Security issues such as food security, provision of health care, and development of education can’t be addressed by sending more and more troops into a region, or by firing missiles and dropping bombs.

In the past few days, the Taliban have responded to U.S. drone attacks with attacks of their own and with threats of further retaliation which have provoked renewed drone attacks by the United States. Are we to believe that the predictable spiral of violence is the only way forward?

Antagonisms against the US in Pakistan, Afghanistan and Iraq will be reduced when we actively respond to the reality revealed to us by the drones’ own surveillance cameras: severe poverty and a crumbling or nonexistent infrastructure. Human interaction, negotiation, diplomacy and dialogue, not surveillance and bombing by robots, will ensure a more peaceful future at home and abroad.

We can’t see what the drones’ “pilots” can see through the camera-eye of the surveillance vehicle. But, we can see a pattern in the way that the U.S. government sells or markets yet another war strategy in an area of the world where the U.S. wants to dominate other people’s precious resources and control or develop transportation routes. We’ve heard before that the U.S. must go to war to protect human rights of people in the war zone and to enhance security of U.S. people. Certainly, the U.S. is nervous because Pakistan possesses a “nuclear asset,” that is to say, nuclear bombs. But so do other states that have been reckless and dangerous in the conduct of their foreign policy, particularly the United States and Israel.

At the gates of Creech Air Force Base, our signs read: “Ground the Drones…Lest You Reap the Whirlwind,” and “Ending War: Our Collective Responsibility.” Our statement says: “Proponents of the use of UASs insist that there is a great advantage to fighting wars in ‘real-time’ by ‘pilots’ sitting at consoles in offices on air bases far from the dangerous front line of military activity. With less risk to the lives of U.S. soldiers and hence to the popularity and careers of politicians, the deaths of ‘enemy’ noncombatants by the thousands are counted acceptable. The illusion that war can be waged with no domestic cost dehumanizes both us and our enemies. It fosters a callous disregard for human life that can lead to even more recklessness on the part of politicians.”

We hope that U.S. people will take a closer look at our belief that peace will come through generous love and through human interaction, negotiation, dialogue and diplomacy, and not through robots armed with missiles.

Kathy Kelly is a co-coordinator of Voices for Creative Nonviolence and the author of Other Lands Have Dreams (published by CounterPunch/AK Press). Her email is kathy@vcnv.org

Brian Terrell (terrellcpm@yahoo.com) lives and works at the Strangers and Guests Catholic Worker Farm in Maloy, IA.
Posted by NO Base Stories of Korea at 6:03 AM