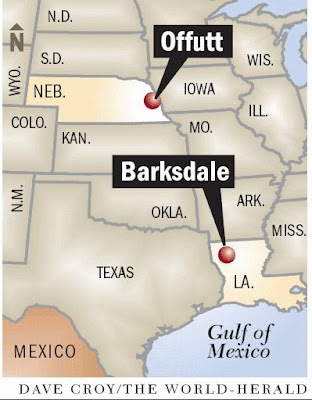 WASHINGTON -- Offutt Air Force Base is not the preferred site for the
Air Force's new Global Strike Command.

Station KTBS in Shreveport, La., reported that the Air Force had
selected Barksdale Air Force Base as the permanent location of the
command.

Offutt was among six finalists for the 900-job command.

No decision has yet been made on the 24th Air Force, a new unit
devoted to cyberspace. Offutt also is in the running for that unit.

Missing out on the Global Strike Command is an economic blow to Omaha,
particularly to the area around Bellevue's Offutt Air Force Base.

In addition to the 900 new Air Force jobs, the command would have
prompted an expansion of Offutt and would have created related jobs in
the private sector, Omaha and Bellevue officials have said.

Congressional and community members expressed disappointment that
Offutt was not selected.

Nelson said the location of the Global Strike Command will affect the
world's perception of nuclear security to the United States.

"The Air Force has missed an opportunity to send the message that our
nuclear deterrence missions are a priority. "Not locating it with
StratCom diminishes its perceived value," Nelson said.

"I am particularly disappointed with the decision on where to locate
the Air Force's Global Strike Command from a national security
perspective," Nelson said. "It is on that basis that I believe the Air
Force has made a huge mistake in not locating this command at Offutt.
I am very disappointed and strongly disagree with the Air Force's
decision."

Megan Lucas, president of the Bellevue Chamber of Commerce, said, "We
can't help but be disappointed."

Mayor Mike Fahey and David Brown, president of the Greater Omaha
Chamber of Commerce, were flying to Colorado Springs today[fol: thurs:
] for a meeting with Michael Donley, secretary of the Air Force. With
Fahey and Brown was Jim Krieger, chief financial officer of The Gallup
Organization.

Donley is in Colorado Springs for a space conference. Lucas, who is at
the conference, said she also will attend the meeting.

Lucas said the Omaha-area officials hope to learn why Offutt wasn't
picked. They'll also campaign for Offutt to host the 24th Air Force, a
newly created 400-person cyberwarfare unit that doesn't yet have a
home.

Terry said he will continue advocating for Offutt to be chosen for the
cyberspace unit.

"I have long believed that the base's infrastructure and presence of
StratCom, coupled with our community's highly skilled and capable
workforce, made Offutt stand out as the obvious and best choice for
the command," Terry said.

Offutt Air Force Base is a finalist for that cyberwarfare unit. The
Air Force has said that it expects to make a decision on its permanent
home by summer.

In one, a bomber took off from North Dakota and flew across the
country, its crew unaware that the aircraft had been mistakenly armed
with nuclear warheads. In another, four fusing devices for ballistic
missile warheads were mistakenly shipped to Taiwan.

The Air Force decided to create a command strictly devoted to
overseeing all Air Force nuclear operations, including all bomber and
missile bases.

• Home to the U.S. Strategic Command, the lead U.S. defense agency for both cyber and nuclear operations. It also houses the 55th Wing of the Air Combat Command and the headquarters of the National Weather Agency. It is well connected to the defense communications system, the reason President George W. Bush landed there on 9/11 for a teleconference with advisers.

• Base population: About 7,400 active-duty and Reserve personnel, according to the Air Force Times

• Where: 10 miles outside Shreveport, La.

• Home to the 8th Air Force, which oversees all bombers. It's also home to a B-52 wing that flies both nuclear and conventional missions. It has been the provisional home of Air Force cyber operations. In addition, it's the base where Bush was originally diverted on 9/11 before landing at Offutt.

• Base population: About 7,400 active-duty and Reserve personnel, according to the Air Force Times