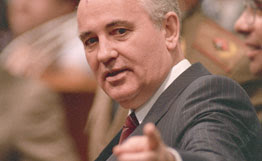 * Image Source*
same as the article below

Gorbachev said in an interview with Germany's Bild newspaper published on Thursday that Western Germany, the United States and other powers had pledged after Germany's reunification in 1990 that "NATO would not move a centimeter to the east."

Gorbachev said the Americans had failed to fulfill the promise and the Germans had also turned a blind eye.

"They probably rubbed their hands rejoicing at having played a trick on the Russians," the former Soviet leader told the paper, adding that this had led to Russia's disillusionment with post-Cold War relations with the West.

NATO has enlarged since 1999, admitting three ex-Soviet Baltic republics and four Communist-bloc states in Eastern Europe. The membership was more recently increased on Wednesday, when Albania and Croatia formally joined the alliance.

The expansion has strained relations between the West and Russia, which is concerned by the new military bases emerging along its borders.

Last December, European NATO members led by Germany blocked U.S.-backed bids by Ukraine and Georgia to join programs leading to membership in the military alliance, but the ex-Soviet states were told they would eventually be allowed to join.

Nobel Peace Prize winner Gorbachev is respected in the United States and Europe for his role in ending the Cold War, but criticized by some in Russia for the reforms that led to the collapse of the Soviet Union and the ensuing chaos.