North Korea is on mute while UN Security Council deliberates 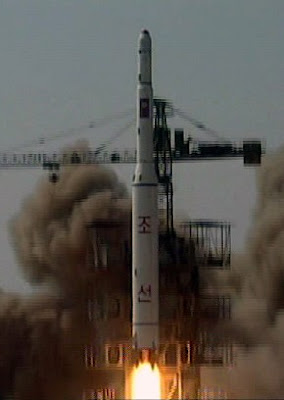 * Image source/caption*
“In this image made from Korea Central Television footage, first made available Tuesday April 7, shows the launch of a rocket from Musudan-ni, North Korea on Sunday, April 5. (AP Photo)”

North Korea has been carrying on a loud internal celebration claiming that the “satellite” launch was successful, but externally to international listeners, they have placed themselves on “mute” mode. The silence is noteworthy in light of claims put forth by North Korea ten days before the launch on March 26, when a spokesperson for the North Korean Foreign Ministry responded to a question from a reporter for the state-run Korean Central News Agency by saying, “The fact that the United Nations (UN) Security Council is raising our peaceful satellite launch as an issue for discussion is itself an outrageous and hostile act against us.” The spokesperson also warned that as a result, it would consider the 2005 six-party denuclearization agreement ended, “Six party-talks would cease to exist from that moment.” While a UN Security Council session was called at Japan‘s request at 3 pm on Sunday (4 am Monday in South Korea) immediately following the missile launch and discussions were carried out over the North Korean rocket issue, North Korea has not shown any particular response.

Some analysts view this as reflecting consideration for the UN Security Council’s uncertainty regarding adoption of a resolution for sanctions. At present, the UN Security Council has called a session and raised the North Korean rocket issue as an item for informal discussion. But this is different from a referral, for which the issue needs to pass through a broad consultative process and opinions are fine-tuned. Only after a referral takes place, is it decided whether or not a resolution will be presented for sanctions against North Korea, a chairman‘s statement or a press statement will be recommended. China had formerly said they agreed to issue a less severe response in the form of an U.N. chairman’s statement. “With China and Russia opposing sanctions, North Korea is just going to want to wait and see where the ball bounces,” said Koh Yu-hwan, a professor of North Korean studies at Dongguk University.

Experts are viewing the U.S. position as hinging on how long North Korea‘s fence sitting continues. If plans for a resolution on sanctions at the UN Security Council level do not pan out, the U.S. has a wider margin to work with and may enter into negotiations. “Without means of pressuring North Korea like energy or food, the U.S. will consider negotiations with North Korea, if only to resolve the problem of the U.S. reporters being held there,” said Yang Moo-jin, a professor at University of North Korean Studies. “If China plays the role of mediator during this time, the situation could open up for discussions between North Korea and the U.S.,” Yang predicted.

But if the U.S. is unable to produce a picture for negotiations with North Korea after the UN Security Council decision, analysts suggest that North Korea may engage in another action in order to “shock” the U.S., referring to the aftereffects of the launch which may be more significant than the launch itself.