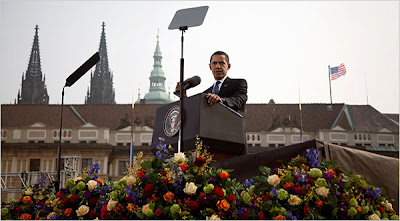 * Image Source/ caption*
President Obama said that North Korea had broken global rules in launching a rocket over the Pacific in a speech in Prague on Sunday.

PRAGUE — President Obama said that North Korea violated international rules when it tested a rocket that could be used for long-range missiles, and he called on the United Nations Security Council to take action.

“This provocation underscores the need for action, not just this afternoon at the Security Council but in our determination to prevent the spread of these weapons,” Mr. Obama said. “Rules must be binding. Violations must be punished. Words must mean something.”

The United States Northern Command issued a statement that North Korea’s taepodong 2 missile flew over Japan, with its payload landing in the Pacific Ocean.

“No object entered orbit and no debris fell on Japan,” the assessment said.

White House officials said that the failure of the launch would not stop the United States from taking the matter to the Security Council. “I think there have been a number of instances now where the North Koreans have failed in these attempts,” White House Spokesman Robert Gibbs said. “The launch itself was a violation,” he said, adding that the fact that the launch failed did not make a difference in pursuing punitive sanctions.

Mr. Obama’s comments on North Korea were delivered here at the end of a historic speech before more than 20,000 people that, in a twist of irony, was planned in advance to lay out Mr. Obama’s plans to stop the spread of nuclear arms. That North Korea had fired a rocket over Japan and into the Pacific just hours before Mr. Obama’s speech lent his message an added urgency, Mr. Obama said, although White House officials disputed any suggestion that the secretive government in the North timed its rocket launch to coincide with Mr. Obama’s speech.

“I hate to speculate” about North Korean motivations,” said Gary Samore, the White House coordinator for nonproliferation, adding that the North Koreans had announced their launch window two weeks ago and that weather conditions had turned favorable today. “I’m not sure this is a deliberate calculated action on the part of the North Koreans.”

Deliberate or not, the North Korean action served the dual purpose of lending urgency to Mr. Obama’s speech while emphasizing the often tied hands of the international community with regard to stopping North Korea’s pursuit of nuclear weapons. The Security Council may slap Pyongyang on the wrist, as it has before, but China, a permanent member, has often stood in the way of strong international action.

Nonetheless, Mr. Obama said he would push for strong Security Council action. “Now is the time for a strong international response, and North Korea must know that the path to security and respect will never come through threats and illegal weapons.”

But it remained unclear exactly what the West would be able to do. President Bush pressed for similar sanctions after the North’s nuclear test in October 2006, but they had little long-term effect.

Mr. Obama also said that he still planned to continue plans to pursue missile defense, but he tied the need for such a system to any Iranian acquisition of nuclear weapons. Russia opposes locating a defense shield in Poland and the Czech Republic, as current plans call for, and Mr. Obama said in a letter to Russian President Dmitri Medvedev two months ago that if Russia were able to help the United States stop Iran from getting a nuclear weapon, there would be no need for a missile defense shield in in Eastern Europe.

The issue has particular resonance here in Prague, since the now collapsed government of Prime Minister Mirek Topolanek went to bat against popular opinion here to support the missile shield, only to have the Obama administration begin to walk back from the plan.

“Let me be clear: Iran’s nuclear and ballistic missile activity poses a real threat,” not just to the united States, but to Iran’s neighbors and our allies,” Mr. Obama said. “The Czech Republic and Poland have been courageous in agreeing to host a defense against these missiles. As long as the threat from Iran persists, we will go forward with a missile defense system that is cost-effective and proven.”
Posted by NO Base Stories of Korea at 12:48 AM