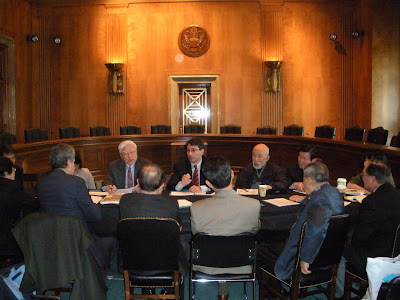 * Image Source*
same article as below

At this time of heightened tensions in the Korean Peninsula and Northeast Asia and rhetorics of military actions flying around, there are also civilian voices calling for peaceful resolution and arms reduction. The National Campaign to End the Korean War kicked off its campaign on March 18 with advocacy meetings and visits in the U.S. Senate offices [Photo by Korea Report shows a meeting in the Foreign Relations Committee room]. The coalition of over 60 organizations have signed onto an open letter to President Obama calling for the signing of a peace treaty to officially end the Korean War (moving beyond the current armistice agreement) as a prerequisite to moving forward with negotiated settlements for peace and security in the region.

The Asia-Pacific Freeze is a trans-national campaign to freeze and then reduce the military spending of the United States, Japan, China, Russia, South Korea, and North Korea. These countries, which are participating in the Six Party Talks, account for more than 65% of global military spending. The campaign cites the urgent need to address the dangerous escalation in global military spending, which has increased 45% over the last decade, and "the wasting of precious resources on preparing for war when the world faces a dire economic crisis and the planet faces a catastrophic climate crisis." The campaign believes "the place to begin is with the major military spenders, particularly the United States... [and] we believe the first step is an Asia-Pacific Freeze."
Posted by NO Base Stories of Korea at 9:28 AM