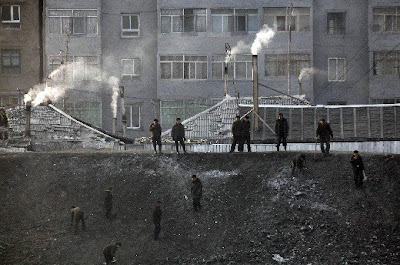 Same as the article below:
'North Korean employees working on the banks of the Yalu River in the North Korean city of Hyesan, which borders China‘s Changbai county, April 6. North Korea fired a long-range rocket over Japan on Sunday.'

Experts are saying that North Korea’s claims of success are motivated by domestic political concerns. Kim Yeon-cheol, Director of Hankyoreh Peace Research Institute, said that such concerns include “demonstrating the legitimacy of the system ahead of the launching of Kim Jong-il’s third term at the first meeting of the 12th Supreme People‘s Council on Thursday, and inspiring hope towards the building of a ‘strong and prosperous nation’ by 2012.” North Korean media have directly linked the satellite launch to building internal unity, for example announcing that “the success of this satellite launch greatly inspires our people during a turbulent time” and is an act of “throwing open the doors.”