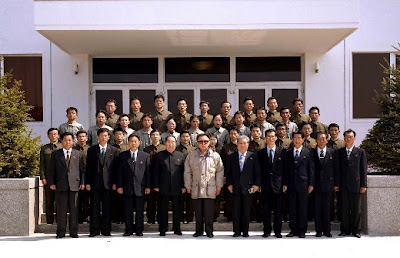 * Image Source/ caption*
same as the article below.

In an unprecedented move, North Korea announced National Defense Commission Chairman Kim Jong-il personally oversaw the launch. On April 6, North Korean news outlets reported that Kim visited the General Satellite Control and Command Center and observed the entire launch process of the Kwangmyongsong (or Lode Star)-2 satellite. Korea Central Television reported a successful liftoff, saying there were “storm-like cheers and applause when Kwangmyongsong-2 was smoothly and accurately put into its orbit.” The broadcaster said scientists and technicians expressed their great appreciation to the North Korean leader.

The news reported, “Expressing great satisfaction over the fact that scientists and technicians of the DPRK (North Korea) successfully launched the satellite with their own wisdom and technology, he (Kim) highly appreciated their feats and extended thanks to them.” They also said, Kim “met with the scientists and technicians who have contributed to the satellite launch by devoting all their wisdom and enthusiasm with ardent patriotism, and warmly encouraged them before posing with them for a photograph.”

North Korea fired off the Kwangmyongsong-1 satellite in 1998 and the Taepodong-2 rocket in 2006, but it was the first time that North Korea reported Kim personally observing a launch, although they did not say where the general command center is located. Analysts also note that it is unprecedented to report Kim’s whereabouts on the day of the liftoff. A source at the South Korean government said, “Kim stayed at Pyongyang on the day of the launch,” indicating the center may be located at Pyongyang.

Both unveiling the leader’s whereabouts and releasing messages underscoring the significance the event had to authorities, indicate a signal to the United States and others that the rocket launch was the result of a direct order by Kim. Some interpret these events as a way to laud its technology prowess in anticipation of the annual meeting of the Supreme People’s Assembly and the inauguration of the “third regime of Kim Jong-il” on April 9.

Analysts, however, suggest that Kim is likely to lose his credibility as a result of this move by directly participating in propaganda that claims the launch was a success when other nations call the satellite launch a failure. Some observers say North Korea may be bearing the brunt of not undermining Kim’s legitimacy, and placing too much weight on the satellite launch for the sake of internal politics.