Text Fwd: TAKE BACK THE INITIATIVE 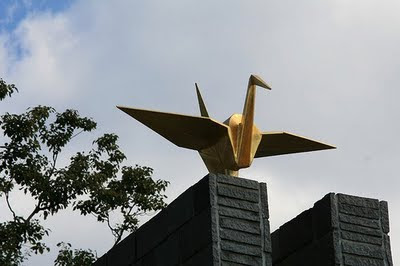 At 11:02 am today the whole city of Nagasaki stopped for a moment of silence to observe the exact time the US dropped the bomb 64 years ago.

I returned to the second day of the Mayors for Peace conference. I attended a three-hour workshop that reviewed the campaign strategy for the organization. Then they opened the floor for more mayors to speak. It was interesting to learn that 57% of the cities in Belgium (323 of them) now belong to Mayors for Peace.

There are 13 mayors here from Bangladesh and they have committed to return home and organize 100 cities to join the organization during the next four months.

The US is lagging way behind as only 155 mayors have joined the organization and it appears that getting them to take an active role is quite a challenge.

I was approached by the mayor and a councilman from Freetown, Sierra Leone, which is the capital and largest city in that African country. He too asked for a copy of the speech I made yesterday and asked about affiliation in the Global Network. I was really impressed with his sincere interest in the space issue and promised that I'd be in touch with him immediately.

I was also impressed today with Syria's representative who talked about the obvious fear that the Middle East could soon see a regional nuclear arms race. Syria has proposed a resolution at the United Nations to create a Nuclear-Free Zone in the region but Israel has been blocking it. Israel, the only current nuclear power in the Middle East, refuses to acknowledge that they have a couple hundred nuclear weapons and is adamant that no other Middle East country (Iran) should be allowed to have nukes.

A couple of days ago I was on the speaking platform with old friend Joseph Gerson who works for the American Friends Service Committee (AFSC) in New England. I first met Joseph in Tokyo in 1984 when we both attended the World Conference against A & H Bombs. During his presentation in Hiroshima the other day he quoted Gen. Maxwell Taylor (from the Vietnam war era) talking about control of oil in the Middle East. Gerson said Gen. Taylor called the region the "jugular vein of western capitalism." That tells the whole story.

I head for the city of Fukuoka late tomorrow afternoon after the final sessions of Mayors for Peace conference conclude. I will speak in Fukuoka on Tuesday night. Wednesday I get a day off before flying to Seoul, South Korea on Thursday where I will spend my final week of this trip meeting with many different Korean organizations and doing two formal talks - all of which have been organized by Global Network board member Sung-Hee Choi.

One final observation here. After listening to people from virtually every continent over the past two weeks I see a trend underway. The public around the planet generally feel powerless as most governments are ignoring the people. The strategy of most peace groups has been one of playing "inside the box". I mean no offense to anyone but too often our organizations end up acting like "junior negotiators" with the politicians and political systems. When we play by the rules of the status quo nuclear powers we get submerged inside their box. They are pros at controlling the game and the agenda.

The way out I believe, the way we make real progress, is to get out of the box and get with the people. We must "up the ante" and ask for more. We should stop begging for "arms control negotiations" which are bearing no real fruit. Instead we should be creating a global coalition of peace groups, unions, cities, social justice groups, womens organizations, environmental organizations and together we need to be call for full and complete global disarmament and conversion of the military industrial complex.

We have to take back the initiative and advance a positive alternative transformative vision of the future that solves for poverty, climate change, human needs, peace and justice.

The global movement is out there but fragmented. We need to "globalize" our message and unify our movement. When we do that we can put the corporate forces of globalization on the defensive and we can make progress. All of us need to begin talking about this in our local meetings and at every other opportunity we get.
Posted by NO Base Stories of Korea at 1:26 AM