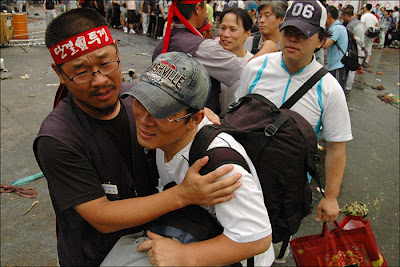 _ Union members who are affected by the layoffs, are allowed to make a choice of unpaid leave, transfers to sales positions, transfers to spin-offs, or voluntary resignation. 48 % of restructured people are being given unpaid leave or are being transferred to sales positions, and 52 % are voluntarily resigning or shifting to spin-offs. (However, what is the '100%' out of which the ratio is applied is subject to additional negotiations for details.)

_After one year, depending on production levels, workers on unpaid leave are allowed to engage in job rotation and 2-day work shift system will be implemented. Workers who are transferred into sales positions will be provided with wages of 500,000 Won per month for one year.

__Workers who take an unpaid leave, transfer to sales positions or voluntarily retire during this restructuring period will be fairly reinstated or rehired if a demand for new workers arises in the future as a result of an improvement in the company’s financial situation.

__An additional two-month voluntary retirement allowance will be paid to workers taking unpaid leave or retiring voluntarily, while livelihood security support, such as job placement, will be provided in cooperation with central and local governments and cooperating firms.

__The management will withdraw criminal proceedings against the trade union and its members in order to encourage good willingness for the revival of Ssangyong Motors. Civil liability will be also called off when the company’s revival plan is approved.

As for the KCTU’s position on the agreement, please see the below statement. But at this moment, we would like to point out that 96 strikers have been jailed, immediately transported from the sit-in strike to the police jail. We are very concerned that arrested people will be facing serious prison sentences and the union will face massive legal fees. In this regard, we are kindly requesting you to keep your eyes on this case continuously. We will keep you informed on any development of Ssangyong workers who are taken into custody.

Finally, we would like to emphasize that international solidarity and pressure contributed enormously to bring a peaceful settlement of the dispute. We would like to extend upmost appreciation for your great support and solidarity for the Ssangyong Motors Workers.

KCTU Statement on Agreement
between Ssangyong Motors Management and Workers

The Struggle against Layoffs will Continue!

The management and trade union of Ssangyong Motors held their final round of talks today (6th August) and came to an agreement. The KCTU respects the decisions of KMWU Ssangyong Motors Branch, of coming to an agreement through dialogue to prevent further catastrophe. We firmly reaffirm that the inhumane and potentially deadly actions taken by police and management during the course of the strike are acts that cannot be condoned. Innocent workers are still being made to bear the brunt of this economic crisis and the poorly-conceived sell-off of companies to foreign capital. If these circumstances persist, the KCTU warns that the struggle against unjust dismissals can re-spark anytime, anywhere.

The struggle of KMWU Ssangyong Motors Branch is the result of bad contradictory economic policies. The management and government initially caused and then precipitated the crisis. They had continuously looked for ways to bash the union. Workers were forced through mass dismissals to pay for bad management practices. The government had pushed ahead with the sell-off of Ssangyong Motors to Shanghai Motors, which then withdrew after profiteering, driving Ssangyong to bankruptcy. Furthermore, we witnessed the worst forms of human rights violations such as cutting off the electricity, water and medicine, and the clashes in front of the plant was also very serious. Thus, the lesson to be learnt from this crisis is that the government must revise its substandard economic and labour policies while the management must do away with its union-bashing attitude and practices such as refusing to recognize the trade union as a dialogue partner.

The agreement between Ssangyong Motor labour and management will not automatically lead to normalization of production. The forthcoming revival process of Ssangyong Motors may entail more confrontation. Both government and management must realize that if they maintain their present mindset, the tragedy can be repeated. The management must acknowledge the errors that it had made, and accordingly sincerely reflect upon their conduct as well as show their will for improvement. The government should turn away from their attitude of instigating destructive government-labour and management-labour relations, including its excessive criminal punishment for legitimate union activities. Furthermore, the government should come up with responsible measures such as injecting needed government aid into the ailing company. Both the government and management must not forget that the reason Ssangyong Motors struggle went beyond a ‘managerial’ to become a ‘political’ issue, blocking amicable settlement, was precisely because of their negative approach.

The KCTU will not stop its struggles against anti-labour policies of the Lee Myung Bak government, and will not stand by complacently should Ssangyong Motors continue its union-bashing practices as shown during the recent crisis. We express sincere gratitude to our members and all citizens who had exerted tremendous effort into settling the crisis, and resolve to strive more strongly to attain labour rights of 15 million workers of South Korea.

Finally, the KCTU hopes that the souls of Ssangyong Motors workers and family members who had lost their very lives in the course of these mass redundancy dismissals may rest in peace and conveys deep condolences to the bereaved.

Posted by NO Base Stories of Korea at 7:17 AM