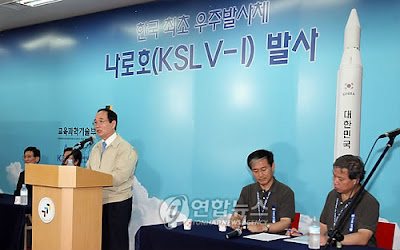 South Korea's first home-grown rocket and satellite launch was a failure today. The $400 million rocket delivered its satellite payload far above its intended orbit. The cost of the satellite is not being mentioned in South Korean media, likely because they don't want the taxpaying citizens to be aware of the massive amounts of public funds lost on the failed mission.

"Since the 100kg scientific satellite does not have any on-board propulsion systems, if it fails to enter proper orbit there is no way to correct its trajectory," one expert said. He declined to say whether the satellite was lost or if it went into orbit, but cannot be found.

Not enough people in the South Korean peace movements are yet knowledgeable about space issues to the point where they were actively tracking this mission. After my recent trip there, and this failed launch, I would imagine that will begin to change.

One of the interesting things about this South Korean rocket launch is the hypocrisy connected to it. When North Korea recently launched a rocket and attempted to put a satellite in orbit both the US and South Korean governments went ballistic - pardon the pun. But when the shoe was on the other foot, no problem at all is proclaimed. This double standard is the reason that so many people around the world have such little respect for the US and its allies these days.

On August 23 the US test-fired another Minuteman nuclear missile from Vandenberg AFB in California into Kwajalein Atoll in the Pacific Ocean. Then South Korea fireslaunches its first rocket. In both cases these two "good guy" countries are doing the same thing they scream at North Korea for trying to do. You can't have it both ways.

Why is testing nuclear rockets and putting satellites in orbit wrong for one country but OK for another? I guess the answer is: which side of corporate capitalism are you on?