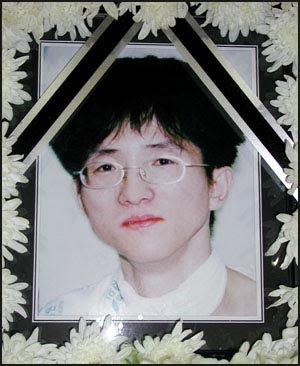 A peace message from Korea May 23, 2009
Kang Je-suk
(Co-representative of the Committee for Resolving the Problem of the Korean Atomic victims and their second generation)


Dear the attendants of the Australia-Japan Peace Forum in Melbourne.

I’m very grateful for the opportunity to send congratulations on the opening of the Australia-Japan Peace Forum. And I would like to send the message of peace to all the people of this Peace Forum, who love peace.

On August 6 and 9, 1945, in Hiroshima and Nagasaki, Japan, a large number of people and nature itself were damaged and devastated by the atomic bombs dropped by America. In Hiroshima and Nagasaki at that time, there were many Korean people. They were called Japanese then, but many had been forced to leave their homeland as forced laborers, while others had come to seek ways to make their living because of the Japanese colonial policy in Korea. Besides these Koreans, there also were many Asian peoples. They were all victimized by the atomic bombs. But the Japanese government has taken a discriminatory attitude toward these peoples and has evaded war responsibility by only saying that victims were solely Japanese people and it is they who want peace. When the atomic bombs were dropped, in Hiroshima there were 50,000 Korean people who were victimized, and in Nagasaki 20,000 Korean people were victimized. The number of Koreans killed in both cities was 10% of the all the victims of the atomic bomb atrocity, which is a little known fact in Korea, and in Japan too.

Today, May 23, when your Peace forum is held, I will be conducting the fourth memorial service for Kim Hyeong Yul, the first chairman of the Kanyukai, the Association of Korean Atomic Bomb Victims’ Second Generation. He was the first person to disclose his being in the second-generation of an atomic bomb victim family in Korea, and he was the first to raise the issue publicly and to work to see the problem of the second generation of the atomic bomb victims addressed. The late Kim Hyeong Yul ‘s mother was born in Hiroshima in 1940, and was atom-bombed at the age of 6. As a consequence, Kim Hyeong Yul inherited from his mother congenital immune globulin deficiency, which he suffered as an after effect of the atomic bomb. He passed away at the young age of 35 years on May 25, in 2005, 60 years after the atomic bombing.

While those war victims who have inherited such effects are alive, we can’t say that the war has ended for them. Today, May 23, in Australia you are holding the Australia –Japan Peace Forum and in Korea we are attending the 4th memorial service of Kim Hyeong Yul, which will remind us of the pain and grief of those people and give us hope and solidarity for peace. To grow and realize world peace, we have to learn the history of the past and make it a lesson not to repeat this mistake. If there is some guilt, we should admit this guilt and then we’ll become reconciled and friends. If we become friends, we won’t be able to make war against each other. Therefore I would like to send my deep gratitude and a big applause to Mr. David Palmer and other attendants of this Peace Forum.

The place called ‘Hapcheon’ is the county where the largest number of atomic victims in Korea live. Before long we hope to make a World Peace Park in Hapcheon. I hope the attendants of this Peace Forum will remember not only Hiroshima and Nagasaki but also Hapcheon in Korea and hope all of you will one day make a peace pilgrimage to Hapcheon.