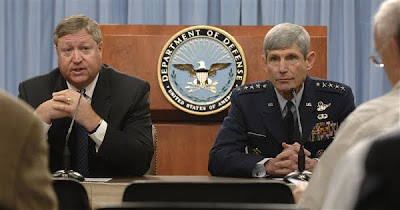 WASHINGTON, Aug. 7, 2009 – A key step in reinvigorating the Air Force’s nuclear deterrence mission will be made today with the activation of the service’s Global Strike Command at Barksdale Air Force Base, La.

Air Force Secretary Michael B. Donley said the new command will bring together the Air Force bomber force and intercontinental ballistic missiles under a single commander.

“Standing up the command is no small task, and actually we’re doing it sooner than we anticipated,” Donley said during a Pentagon news conference Aug. 5. “This command will provide the combatant commanders the forces needed to conduct strategic nuclear deterrence and global strike operations through ICBM, B-2 and B-52 operations.”

Air Force Lt. Gen. Frank G. Klotz will command the organization. The headquarters will include 900 people, and is slated to reach full operating capability by Aug. 7, 2010, Donley said. The 20th Air Force, the service’s missile organization, will come under the new command in December; and the 8th Air Force, the bomber component, will come under the command in April.

Air Force Chief of Staff Gen. Norton A. Schwartz stressed that the new command will be a major command like Air Combat Command or Air Force Special Operations Command. The role is to “organize, train and equip America’s ICBMs and nuclear-capable bombers, and prepare a cadre to do this important work with passion and professionalism,” he said during the news conference.

Ensuring professionalism and pride in the nuclear field will be vital to the command’s success, Schwartz said, noting that airmen with nuclear expertise had been leaving the service, feeling their work was not appreciated.

“The bottom line is retention has a lot to do with perceptions on how important people’s work is, and how worthy that work is,” the general said. “We’ve worked to make it clear to those who will serve in this command that the work is important to the country’s defense and it will continue to be so.”

Making the command a major command also will give airmen in the nuclear fields an advocate equal to the other commands, he said.

The creation of the command is an effort to boost security and reduce errors. In a 2007 incident, nuclear weapons were loaded aboard a B-52 bomber at Minot Air Force Base, N.D., and flown to Barksdale before the mistake was discovered. In another incident, nuclear nose cones mistakenly were shipped to Taiwan. As a result, the service’s top civilian and military officials -- Air Force Secretary Michael Wynne and Chief of Staff Gen. T. Michael Moseley -- resigned.

Multiple studies of the incidents and the Air Force’s atmosphere revealed that the service’s nuclear forces and the entire enterprise lacked clear lines of authority and responsibility, officials said. The Global Strike Command is one of the solutions.

Donley said moves at the Air Staff and in the field have emphasized accountability and compliance with respect to nuclear issues at all levels. The service has re-emphasized training for inspectors and added $750 million over the Future Year Defense Plan for nuclear efforts, in addition to a $4.2 billion base budget. The service also is standing up another B-52 squadron, in part to provide for longer and more focused training.

A number of entities have an interest in the nuclear arena, including the U.S. Strategic Command and the Defense Threat Reduction Agency. These agencies will play a key role in inspections of the new command, Schwartz said.

The command will have an inspector general, and the service has made a special effort to make the inspections “more challenging and intrusive to ensure that commanders get good feedback in how healthy their commands were,” the general said.

Inspections will be demanding, he promised, and will include operations, security, maintenance and weapons.

The emphasis on the nuclear missions means that when a mission requires B-2s or B-52s to carry conventional weapons, they will be reassigned from the new command to the regional commanders for that mission. Global Strike Command will ensure that air and ground crews have expertise in conventional weaponry and raids, but the focus must remain on the nuclear capability, the chief of staff said.