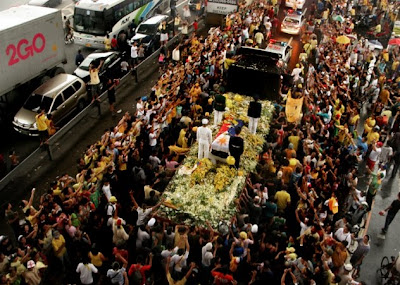 * Image source/ description: same as the source below
'The remains of former Philippine president Corazon Aquino passes through the historical EDSA road with some 300,000 supporters waving to pay their last respect. The road is remembered in 1986 as then anonymous Cory and some 2 million people rallied out the streets to fight a 20-year government dictatorship through peaceful people power revolution. Photo by Arwin Doloricon/ Voyage Film'

I know this post appears rather late, but I couldn’t let Cory Aquino’s death on 1 August 2009 pass without comment. The original inspiration for People Power that toppled one of the worst tyrants of the 20th Century, she would now turn the Patron Saint of peaceful democratic struggles everywhere.

Last week, I was reduced to tears reading two links that my Filipino friend Ruth Villarama, who runs Voyage Films in Manila, sent me of new comments posted on their website.

In the first post, A housewife, a leader, an angel in yellow (3 August 2009), Joan Rae Ramirez wrote: “Her death at 3 AM on August 1 has stopped a nation from its apathetic works to once again remember what was once fought by this ordinary housewife. It is on these rarest moments where the oligarchs came down from their kingdoms to pay their respect and mingle with the people who truly represent the real state of the Philippine nation.”

Karen Lim, who works with Voyage Films as a producer and project coordinator, wrote a more personalised piece titled The Famous Anonymous.

It opened with these words: “I see her on TV. In some instances I even covered her for a story. Our relationship did not go deeper than the reporter-subject, or the audience and the watched. Yet I feel a certain affinity to the most revered President. And when she died I got sad, a strange feeling of sadness where the source is unknown.”

Karen was too young to have remembered much of those heady days of the People Power Revolution of February 1986 — a series of nonviolent and prayerful mass street demonstrations in the Philippines that eventually toppled the 20-year autocracy of Ferdinand Marcos. Indeed, a whole generation of Filipinos has been born since. But that doesn’t stop them from relating to the monumental events that unfolded at at Epifanio de los Santos Avenue, known more commonly by its acronym EDSA, in Quezon City, Metropolitan Manila and involved over 2 million ordinary Filipinos as well as several political, military and religious figures.

As Karen wrote in her tribute: “Cory’s life became ours too. We watched her, sometimes we joined her. We experienced her highs and lows. We are her “Mga minamahal kong kababayan”(my beloved fellowman). She did what no stranger did in my family – unite us in prayer for the country, unite us in laughter amidst the uncertainties of those times. I had no personal connection to this lady, but I have now every reason to mourn her passing.”

Posted by NO Base Stories of Korea at 8:07 PM