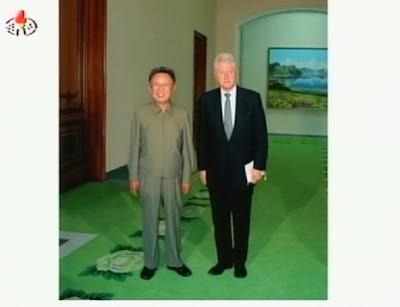 Hankyoreh
[Analysis] Clinton and Kim Jong-il may discuss a big deal to break nuclear deadlock: While Clinton’s visit to North Korea is the strongest card played for journalists’ release, the resumption of denuclearization dialogue will require further diplomacy
Posted on : Aug.5,2009 12:11 KST Modified on : Aug.5,2009 12:49 KST

Observers are saying former U.S. President Bill Clinton’s surprise visit to North Korea on Tuesday morning might have been the best card available for the two countries to make the shift from deadlock to dialogue.

Given the current situation on the Korean Peninsula and structural constraints on North Korea-U.S. relations, it has not been realistically feasible for either President Obama or U.S. Secretary of State Hillary Clinton to visit North Korea. In light of this, the former president’s visit to North Korea represents the most powerful card the U.S. has to present to North Korea as an alternative. Former President Clinton may be in a position to present the Obama administration’s arguments, while avoiding the formalities of bilateral dialogue between the North Korean and U.S. governments. At the same time, a visit by Clinton, whom former South Korean Unification Minister Lim Dong-won describes as the “big shot among big shots within the U.S.,” could save North Korea’s face.

Former President Clinton occupies a significant place in the history of North Korea-U.S. relations, and his stature in the U.S. remains high as well. He is considered by many as the most forward thinking of all U.S. Presidents in terms of advancing relations with North Korea. During his term, he concluded and executed the 1994 Geneva Agreement, took part in the October 2000 North Korea-U.S. Joint Communique, and had planned to become the first sitting president to visit North Korea. In sum, he is likely the figure most preferred by Kim Jong-il and North Korea. In addition, he has enormous potential and maintains realizable clout in Washington political circles. Furthermore, he is on friendly terms with President Obama, and is the husband of U.S. Secretary of State Hillary Clinton.

This North Korea visit recalls the precedent set by another former president, Jimmy Carter, who visited North Korea in 1994 and played a decisive role in averting war on the Korean Peninsula. Experts are forecasting that Clinton’s visit, in comparison, will have even greater significance and a greater influence on the U.S.’s North Korea policy and its relations with North Korea. “We should note that whereas the U.S. administration was displeased with Carter’s visit to North Korea in 1994 at first, Clinton’s visit to North Korea visit has been realized after close fine-tuning with the Obama administration,” said Hankyoreh Peace Research Institute head Kim Yeon-cheol.

The formal objective of Clinton’s North Korea visit is to bargain for the release of two U.S. reporters currently being detained there. A Cheong Wa Dae (the presidential office in South Korea or Blue House) official says that the U.S. government has “not wavered in its policy of handling humanitarian issues and political negotiations separately.” However, few accept that Clinton’s objectives in visiting North Korea are limited to that issue alone. Some observers are asking why someone as prominent as a former president needs be sent if the goal of the visit is to simply bargain for the release of imprisoned journalists. For this reason, former South Korean Unification Minister Jeong Se-hyun calls the visit “a hint at the beginnings of a comprehensive deal between North Korea and the U.S.” Meanwhile, Lim says that the visit signals the “two countries’ intent to find a breakthrough in turning the situation around.”

The Korean Central Television reported on the meeting between Clinton and Kim Jong-il by saying, “They exchanged opinions on matters of mutual concern.” The report can be interpreted to suggest the two discussed issues concerning the two countries beyond the journalists’ release, including the nuclear issue.

Regardless of the details of these meetings, the majority view remains as a result of North Korea’s second nuclear test and public announcement regarding their status as a nuclear state that Clinton’s visit will inevitably be followed by a long and difficult diplomatic struggle and compromise between North Korea and the U.S., and among the nations taking part in the six-party talks.