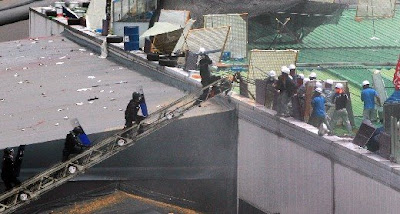 * Image source/description: same as below
'Ssangyong Motors union members try to block the special attack unit from entering assembly shop buildings in the Pyeongtaek plant that are located close to the paint shop where they have been demonstrating, August 4.'

Hankyoreh
Ssangyong Motors factory occupation attacked by police: Police seize one of the paint shop buildings after engaging in an unsuccessful land-air assault against union members on the previous day
Posted on : Aug.5,2009 12:41 KST

In just two days since talks between management and labor broke down, the Ssangyong Motors plant in Pyeongtaek has once again been transformed into a war zone.

On August 4, police and company security clashed violently with union members, as the former attempted to push its way into the plant paint shop where the workers have assembled. The automaker also had the tent camp that had been set up in front of the plant’s gate taken down as the operation unfolded. The Democratic Labor Party had pitched a tent in front of the plant to serve as its temporary office. Other lawmakers and religious and civic group members had set up an additional eight tents.

The police SWAT team deployed a land-air assault on the paint shop Tuesday at 10:30 a.m. They sent in around 10 companies (1,000 men) on the ground while helicopters armed with tearing agents were flown above the paint shop. Police attempts to enter the paint shop from three directions include an effort to secure a path from the roof of a nearby building. Union members, however, used slingshots and Molotov cocktails to provide strong resistance against the assault. The police were forced to withdraw in failure after a three hour-long struggle. At around 12:30 p.m., some 50-company security personnel armed with slingshots and metal pipes attempted to make their way into the paint shop by accessing the roof of a nearby building, but this too, was unsuccessful.

Afterwards, police deployed 40 companies (40,000 men) to the plant, and the company ordered 2,200 employees back to work.


On August 5, it took the police SWAT team twenty minutes to seize one of the paint shop buildings after landing a special attack unit onto the shop’s roof in an armored box by helicopter at 9:50 a.m. This followed the police seizure of the buildings housing the third and fourth assembly line in the automaker’s plant at 8:10 a.m. By that point, most union members had retreated to an adjacent paint shop building, and there was no major clash between members and police officers.

Two union members were injured in a fall from the roof of the paint shop.

http://nobasestorieskorea.blogspot.com/2009/08/specters-of-liquidation-surround.html
Monday, August 3, 2009 Specters of liquidation surround Ssangyong Motors as talks break down
Posted by NO Base Stories of Korea at 6:32 AM