Specters of liquidation surround Ssangyong Motors as talks break down 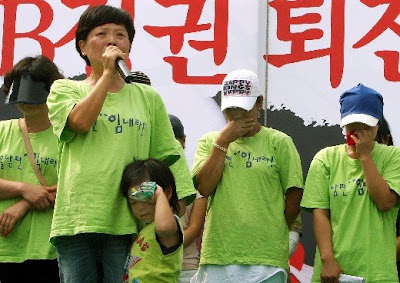 *Image source/ description: Same as below

As a result of Ssangyong Motors management‘s announcement of a breakdown in negotiations on Sunday, the fourth day of management and union talks, attention is now turning to the company’s future.

Although the union is criticizing management for the breakdown in negotiations, on Sunday, it said it was “still leaving the window of dialogue open.” Meanwhile, representatives from management’s side said that they would resume their participation in dialogue “if the labor union accepts the last proposal.” However, observers are saying barring the emergence of a new, revised plan, the possibility of a compromise being reached is slight as both sides are currently being forced to make a decision they would interpret as “a surrender.”

The breakdown in negotiations does not mean an immediate end to the automaker’s rehabilitation, commencement of which was permitted by the court in February. The problem lies in the fact that the value of the company drops every day production is halted at the plant, and at this point, it has been shut down for more than 70 days. A study by Samil PricewaterhouseCoopers in May found that the value of an operable Ssangyong Motors plant was 1.3 trillion Won, approximately 390 billion Won greater than its 938.6 billion Won liquidation value. The company states that losses from the strike have exceeded 300 billion won to date, and it is also impossible to calculate indirect damages on the company’s brand image, confidence among consumers, and sales and after-service network.

“To date, Ssangyong Motor’s sentiments have been those of a family hanging their hopes on a patient who is already brain dead,” said Kim Pil-su, a professor of automotive engineering at Daelim University College. “They have barely begun to resolve labor-management issues, and now it seems like even that 1 percent chance has disappeared,” Kim added.

Even if the sit-in strike were forcibly dispersed, the resulting protests and conflict would make it difficult for the company to normalize production right away. It had previously been predicted that it would take anywhere from one week to one month to get the company back to normal production levels if a compromise was struck, but the precise time frame is now more difficult to pin down.

Ssangyong Motors, which sold 90,000 cars last year, registered a loss of 230 billion Won. The initial goal had been to reduce the scale of red ink to 160 billion Won, but that was based on the assumption that restructuring would be finished within June and that the company would receive a loan of 250 billion Won from the Korea Development Bank (KDB) in development funds for its new C200 model. Even if the company forcibly completes restructuring and requests the loan from the KDB, it is impossible to predict whether the loan will actually take place. A government official is reserved about the chances of this and says, “Since so much time has passed, we need to look objectively at whether a loan is really the way to save Ssangyong Motors at this point.”

Ssangyong Motors management expressed the view Sunday that the courts might once again extend the time limit for submission of a rehabilitation plan. During a telephone conversation with the Hankyoreh, Ssangyong Motors joint receiver Park Young-tae said, “I am the man to save this company, and I will try as far as it is in my power.”

Park added, “We have already researched the value of maintaining Ssangyong Motors and could add the losses incurred from the strike in order to submit a rehabilitation plan that assumes immediate liquidation, but I will work through alternatives until the September deadline.”

However, the activity of other interested parties indicates that bankruptcy is already on their minds. The Ssangyong Motors Subcontractors Association, a group that includes the company’s major creditors, announced Sunday that it plans to move ahead as scheduled to file for early bankruptcy in court on Wednesday. “Since labor-management dialogue has now broken down, we think the courts will look carefully at a bankruptcy filing by the automaker’s largest creditors,” said Choi Byung-hoon, the association’s secretary general. If Ssangyong Motors is declared bankrupt, it will not be able to contest Shanghai Automotive Industry Corporation’s use of the technology it transferred from Ssangyong, and everything basically will end in a “feast of debts” for creditors.

Korea Report
July 29, 2009
Worsening Labor Situation in South Korea
Posted by NO Base Stories of Korea at 6:48 AM