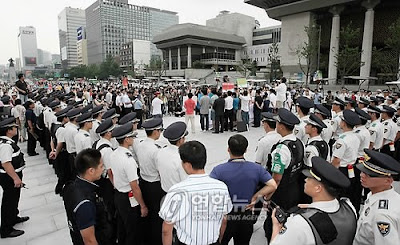 * Image source: Same as below

SEOUL, Aug. 3 (Yonhap) -- Police on Monday took into custody protesters at the newly-opened central Seoul plaza who were denouncing a government ban on rallies at the site the authorities have vowed to keep demonstration-free.

Dozens of opposition party legislators and members of progressive civic groups had gathered at the Gwanghwamun plaza Monday, calling the government ban a repression of democracy and civil liberties.

After 15 months of renovation, the landmark plaza was reopened to visitors over the weekend, featuring new national monuments and pedestrian-friendly boulevards. The plaza, measuring 550 meters in length and 34 meters in width, was visited by more than 370,000 people over the two-day period from Saturday, according to city data.

Police apprehended 10 protesters, charging they were engaged in an illegal rally rather than a news conference.
"Give Gwanghwamun back to citizens," the pickets said. The activists, who had not given prior notice of a rally as required by the law, claimed the gathering was a press conference.

With the opening of the plaza, concerns were raised among authorities that the site could turn into another staging ground for massive anti-government protests. Seoul Plaza in front of the City Hall, which officials said was meant to host citizens' leisure and cultural activities, has been frequently occupied for rallies.

To prevent the Gwanghwamun area from being dominated by protesters, the government said it will only allow "orderly cultural events" that do not cause traffic congestion or disruption.

"The Gwanghwamun plaza has never been properly returned to its rightful owners. With the ban on legal demonstrations and rallies, the plaza is nothing but a garden belonging to the Seoul Metropolitan Government," opposition parties, led by the main opposition Democratic Party, and civic groups said.

"More than 47.5 billion won (US$38 million) was spent out of the people's pocket to create the plaza, but they haven't been allowed the rightful use of the area. We will fight for the right we deserve," the group said.

Progressives claim democracy has been rolled back since President Lee Myung-bak took office in February last year, beefing up police control of the central Seoul area to prevent protests. The conservative administration has been cautious in permitting events that could develop political overtones, especially after the months-long rallies against U.S. beef imports last summer.

Hankyoreh
Posted by NO Base Stories of Korea at 6:48 AM