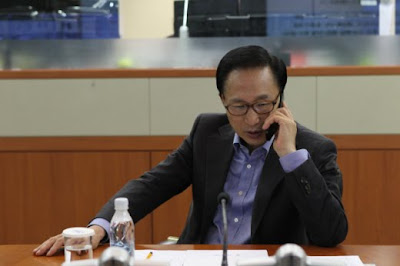 'President Lee Myung-bak speaks with a military officer over the phone
about the sunken navy vessel Cheonan at the Cheong Wa Dae, March 28.'
Hankyoreh
President Lee confirms thus far “No evidence of N.Korean involvement in Cheonan incident”:
The statement comes in the wake of conflicting statements by administration and military officials
Posted on : Apr.2, 2010 12:40 KST

Addressing the cause of the sinking of the Patrol Combat Corvette (PCC) Cheonan on Thursday, President Lee Myung-bak said that they are leaving all possibilities open, but thus far no evidence has been uncovered indicating that North Korea was involved.

This was reported by several participants in attendance at a morning meeting with the ruling GNP lawmakers that have returned from abroad, having recently served as presidential envoys.

One lawmaker who attended said that when one GNP lawmaker stated that it is highly probable North Korea was involved in the sinking and the opposition was planning to politically misuse the sinking by calling an emergency inquiry, President Lee said it is not the case that North Korea was involved, and while they are investigating all possibilities, there has been no evidence of North Korean involvement. President Lee also said if one talks of North Korean involvement without evidence, South Korea would be in a dilemma if surrounding nations like China and Russia ask to see the evidence. Another participating lawmaker said the theory that the boat had been hit by a North Korean mine is just one possibility, and that it would not be desirable to speculate about it. President Lee reportedly cautioned against rash speculation and called on people to speak based on scientific and objective evidence.

To address the fact that the Cheonan was split in two, President Lee said from what he knew from building ships, a wave has the capacity to do cause such damage, and that a ship could break more easily than seems possible coming down off a big wave. He said that the sinking could have been an accident.

In citing a reason for which speedboats fired warning shots, President Lee said that he too wondered why a warship would fire at a flock of birds, but that the ship fired both at a flock heading north and one heading south, and that it is true that they were birds. As for the investigation into the cause of the accident, he said that it could take a long time, and that some investigations take over a year. President Lee said he has asked U.S. President Barack Obama to help provide personnel and equipment assistance to look into the exact cause of the sinking after the Cheonan has been raised.