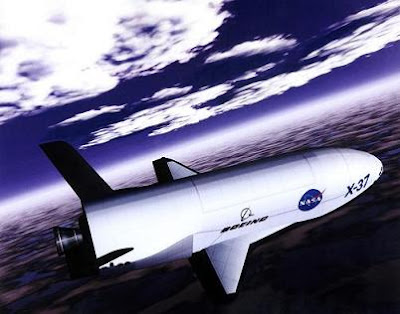 The new military space plane, called the X-37B, was launched yesterday from Cape Canaveral strapped to an Atlas V rocket. The X-37 will spend up to 270 days in space before landing at Vandenberg AFB in California. The space plane will mostly fly on "autopilot" since there is no human inside the craft.

Analysts contend the Falcon is part of the Pentagon's effort to develop the capability to strike anywhere in the world with a conventional warhead in less than an hour - known as Prompt Global Strike.

Referring to the development of global strike weapons, the idea “really hadn’t gone anywhere in the Bush administration,” Defense Secretary Robert M. Gates, who has served both presidents, said recently on ABC News. But he added that it was “embraced by the new administration.”

The purpose of the X-37B program is less clear, largely because it remains classified.

The Washington Times reports, "The actual expense [of the X-37] is hidden in the Pentagon's 'black,' or classified, budget - is likely to cost more than $1 billion. The launch vehicle alone - a two-stage, liquid-propelled Atlas V rocket - costs as much as $200 million. Ten years of development on the plane - as the project was shuffled from NASA to DARPA and finally to its current institutional home in the Air Force - is likely to have cost hundreds of millions of dollars more."

The development of these new space planes is one reason that the Obama administration and the Pentagon are eager to reduce nuclear weapons stockpiles in Russia and China in the years to come. As key elements in the growing U.S. first-strike program, they become even more effective if the U.S. can get its potential rivals to reduce their nuclear retaliatory capability giving the Pentagon an ever greater chance of pulling off a successful decapitating attack.

Thus as the U.S. moves forward with these kinds of global strike systems it will be likely that Russia and China will be forced to respond by refusing to dramatically reduce their nuclear weapons and by developing new technologies to counter the U.S. program.
Posted by NO Base Stories of Korea at 9:56 AM