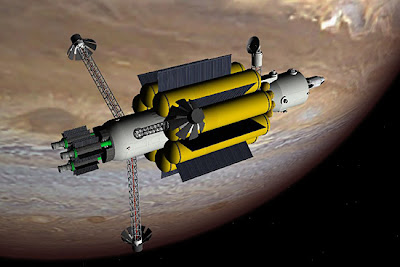 OBAMA PROPOSES MARS MISSIONS - OF THE NUCLEAR VARIETY
Obama went to the space center in Florida today and made a proposal to send humans to asteroids by 2025 and to Mars by the mid-2030's.
In an interview on MSNBC's Hardball with Chris Matthews I heard Sen. Bill Nelson (D-FL) talking about the plasma rocket that they hope can get astronauts to the red planet in just 39 days. See the interview here.
Sen. Nelson mentions former astronaut Franklin Chang-Diaz who is working to develop the plasma rocket. In an interview published in 2009 Chang-Diaz talks about the absolute need for nuclear power in space in order to make the trip to Mars. Here are some excerpts:
Seed: We’ve been sending people and machines into space for more than half a century, but we’re still mostly using chemical rockets.
FCD: Well, part of the problem with electric propulsion back then, and to a lesser degree today, is that it’s hard to get enough electricity to power the rocket. Typically, electricity in space comes from sunlight, solar power. That works okay in Earth orbit and other places close to the Sun. But people have to realize sooner or later that, if we’re ever going to explore Mars and beyond, we have to make a commitment to developing high-power electricity sources for space. What we really need is nuclear power to generate electricity in space. If we don’t develop it, we might as well quit, because we’re not going to go very far. Nuclear power is central to any robust and realistic human exploration of space. People don’t really talk about this at NASA. Everybody is still avoiding facing this because of widespread anti-nuclear sentiment [the legacy of the 1997 Cassini campaign].
Seed: What has to happen to make that change?
FCD: In 1958, the first nuclear submarine, the USS Nautilus, was able to actually navigate under the north polar cap and surface on the other side. No other submarine had ever been able to do that before. It was an eye-opener, a game-changer, a paradigm shift. The idea was that nuclear power enabled a completely different class of missions for these types of ships. Now, nuclear submarines are common. Something similar has to happen in space.
In fact, with the power close to what a nuclear submarine generates, you could use VASIMR [plasma rocket] to fly humans to Mars in 39 days. A chemical rocket makes the trip in eight months. That’s eight months of exposing your astronauts to debilitating cosmic radiation and weightlessness. By the time they get to where they’re supposed to work, they’re gonna be in bad shape—almost invalids! They’ll have to spend a big chunk of their time just recovering from the trip. That’s simply not a smart way to conduct an exploration program. By not addressing the key problems of limited power and propulsion, NASA is forced to work with extremely complicated and expensive mission architectures that are very limited in capability.
Seed: So you believe that in the long run it would be more cost-effective to develop nuclear-electric capabilities in space, even given potential regulatory difficulties?
FCD: Absolutely. People have fears of nuclear power in space, but it’s a fear that isn’t really based on any organized and clear assessment of the true risks and costs. When you send these missions based on chemical propulsion to Mars, they aren’t only going to be extremely expensive, but also extremely fragile. Imagine being on Earth, watching astronauts on an eight-month death trip from which there is no return, all because they made a small mistake or something failed. It would be an agonizing process, and there would be a lot of questions asked if you lost a crew. Well, in space, power is life. You can plan against a lot of contingencies by simply having more power available for a crew to use.
Seed: But the larger versions of VASIMR really need nuclear power to perform. What if NASA chooses not to develop space-based nuclear power?
FCD: We would hope that, if not the US, maybe the Europeans, the Chinese, the Russians, or somebody else will develop a nuclear-electric power capability that we can marry up to this rocket. We have to realize that the US is no longer the only player. The US may choose not to do this, but that doesn’t mean the rest of the world will follow—not anymore. We no longer live in a confrontational world like the one that fueled the Apollo program in the 1960s. We live in a world that has to cooperate, to collaborate. The US has a tremendous opportunity to still be the leader here, but if it isn’t, others will be. Information is traveling faster everywhere now; technology has gained a foothold and developed in the nooks and crannies of the planet. The world has changed, and the US no longer has a monopoly on knowledge. We need to collaborate to build a capable space infrastructure so that we can truly explore.See the full interview here.
UPDATE: Journalist Karl Grossman reports the following:
There was an editorial in Space News on March 1 saying that "Obama's NASA budget also includes support for nuclear thermal propulsion and nuclear electric propulsion research under a $650 million Exploration Technology and Demonstration funding line projected to triple by 2013."
It went on: "Nuclear propulsion research experienced a brief revival seven years ago when then NASA-Administrator Sean O'Keefe established Project Prometheus to design reactor-powered spacecraft capable of carrying unprecedented arrays of science instruments to the outer planets.
Mr O'Keefe's successor, Mike Griffin, wasted little time pulling the plug on NASA's nuclear ambitions -- and a billion dollars worth of other technology projects -- as he focused the agency's limited resource on getting astronauts back to the Moon.
Obama is reversing course again and resuscitating the space nuclear program.
Posted by NO Base Stories of Korea at 11:52 PM