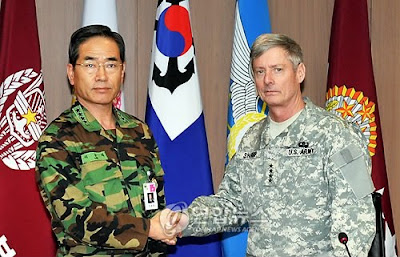 * Image source: Yonhap News
Top brass of S. Korea, US meet over sunken vessel
April 5, SEOUL, South Korea -- Gen. Lee Sang-eui (L), chairman of South Korea's Joint Chiefs of Staff (JCS) and U.S. Forces Korea Commander Gen. Walter Sharp shake hands prior to their talks to discuss the recent sinking of the 1,200-ton Korean corvette "Cheonan" at the Defense Ministry in Seoul on April 5. The Cheonan carrying 104 crew sank in seas off the country's northernmost Baeknyeong Island in an as-yet-unexplained explosion late last month, with only 58 of them rescued. (Yonhap) 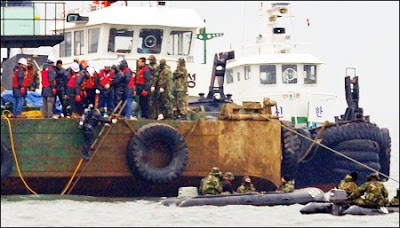 'Members of the Navy’s Ship Salvage Unit prepare a recovery mission Monday for the 1,200-ton frigate Cheonan that sank on March 26 after an unexplained explosion near the western sea border.
/ Korea Times Photo by Hong In-ki'

The top American military officer in South Korea has pledged all possible assistance to help salvage the sunken frigate Cheonan in the West Sea, the Joint Chiefs of Staff (JCS) said Monday.

Gen. Walter Sharp, commander of the ROK-U.S. Combined Forces Command (CFC), visited the JCS headquarters in Seoul for talks with Chairman Gen. Lee Sang-eui on the disaster that occurred March 26.

Gen. Sharp said the United States will provide South Korea with related technology and equipment to help in the salvage work, according to a JCS spokesman.

The U.S. Navy has sent four warships and helicopters to the western waters to help the search-and-rescue and ship salvage mission.

Gen. Lee expressed thanks to Sharp for the ongoing U.S. military support and asked the U.S. to dispatch experts on explosives and naval accidents to help determine what caused the 1,200-ton ship to break into two and sink near the tense sea border with North Korea, the spokesman said.

The request is aimed at ensuring the objectivity and neutrality of the South Korean government's investigation, he said.

"We requested assistance from U.S. naval disaster experts for prompt investigation into what sank the ship and have received a positive response from Washington."

The Cheonan went down after an unexplained explosion. Fifty-eight crew members were rescued, but 45 others remain missing in action - one sailor was found dead, Saturday.

The South Korean military began preparations for salvaging the sunken ship Sunday after the families of the missing sailors asked it to halt underwater search and rescue operations.

Observers say the salvage operation, which will be jointly carried out by the Navy and private companies using giant cranes, could take up to a month due to adverse weather conditions and the weight of the Cheonan.

Sources say five floating cranes and three barges will be used to hoist the wreckage of the ill-fated frigate from the seafloor.

Speculation about North Korea's involvement has been flaring, largely because the ship sank near the scene of three deadly naval skirmishes between the two Koreas in 1999, 2002 and last year.

North Korea, still technically at war with Seoul as the 1950-53 Korean War ended in a truce, does not recognize the western sea border, drawn by the United Nations Command at the end of the war, and claims that it should be redrawn further south.

But Pyongyang has remained silent about the sunken ship.

In a radio address earlier Monday, President Lee Myung-bak said "accuracy is more important than speed" in determining the cause of the disaster, adding that officials should conduct a thorough investigation of the sunken ship.

During a parliamentary hearing Friday, Defense Minister Kim Tae-young said the possibility of a torpedo causing the sinking "appears to be more" than that of a mine, but did not say if he suspected Pyongyang behind the incident

Earlier in the week, he had made remarks citing floating mines from North Korea as a possible cause. He and other Seoul officials, however, have been careful not to name Pyongyang as the culprit.

U.S. ships and military divers have been taking part in the so far unsuccessful efforts to rescue sailors believed to be trapped in the stern of the vessel.

http://nobasestorieskorea.blogspot.com/2010/03/choenan-navy-ship-sinking-mystery-due.html
Tuesday, March 30, 2010
Choenan Navy Ship Sinking Mystery: Due to Key Resove War Drill?
Posted by NO Base Stories of Korea at 10:11 PM