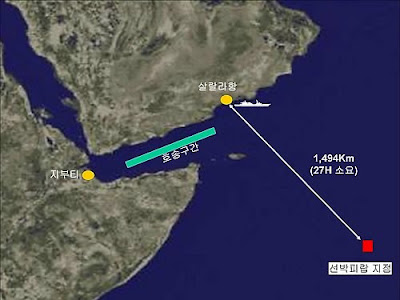 * Image source: MBC
The red square is the spot that the ship, 'Samho Dream' was kidnapped by the 'believed' pirates.The South Korean Navy's Cheonghae Unit, comprised of the Yi Sun-shin, the KDX II destroyer, will be dispatched
from the port of Salalah (yellow circle), Oman.

South Korea has dispatched a 4,300 ton destroyer engaged in anti-piracy patrols in waters off Somalia to intercept pirates who seized a South Korean oil tanker Sunday, the Joint Chiefs of Staff said Monday.

The 300,000-ton Samho Dream, carrying $170 million worth of crude oil, was hijacked on its way to the United States from Iraq, and its crew of five South Koreans and 19 Filipinos was taken hostage.

The Ministry of Foreign Affairs and Trade said the pirates have made no contact yet concerning the hijacking.

``We believe the ship has been seized by Somali pirates, based on the details of our last communication with the ship,'' a ministry officials told reporters.

The Seoul government is dealing with the situation, putting top priority on the lives and safety of the crewmembers, but it won't be engaged in any direct negotiation with the pirates for the safe release of the ship and its sailors, the official said.

The South Korean Navy's Cheonghae Unit is comprised of the Yi Sun-shin, a Chungmugong-class KDX-II destroyer.

The destroyer is equipped with an Mk 45 127mm gun, Harpoon ship-to-surface missiles, RAM Mk 31 ship-to-air guided missiles and a 30mm Goalkeeper system for engaging sea-skimming anti-ship missiles and torpedoes. The 150-meter-long, 17-meter-wide ship has a top speed of 29 knots.

Since its deployment in March last year, the unit has successfully escorted domestic and foreign cargo ships through the troubled waters and thwarted attempts by pirates to hijack ships.

The destroyer also has a Lynx anti-submarine helicopter and a group of 30 UDT/SEAL forces onboard.

Increasingly brazen pirate activity and hefty ransoms have driven up insurance costs and forced some ships to go around South Africa instead of through the Suez Canal.
gallantjung@koreatimes.co.kr