'Here is some propaganda about PAC-3 from pro-MD organization.'

Missile Defense In The News 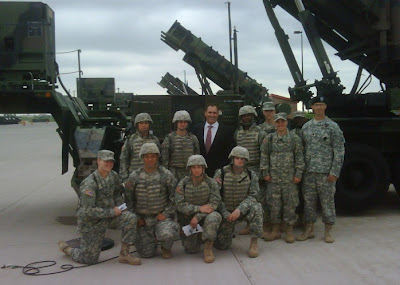 Last week MDAA had the honor to visit and interact with our nation's men and women in uniform at Fort Sill, Oklahoma; home of the U.S. Army Air Defense Artillery (ADA) School. This school teaches all current and soon to be deployed air defense soldiers who are stationed with the 13 Patriot battalions deployed in support of U.S. missile and air defense throughout the world; most prominently in the Middle East and East Asia. Fort Sill runs courses for Patriot operators and maintenance crews ranging in length from 8 to 30 weeks. The ADA school trains approximately 1,500 to 2,000 U.S. soldiers a year, as well as several hundred soldiers from Israel, Germany, Japan, South Korea, United Arab Emirates and other allied nations that have Patriot Air and Missile Defense Systems.

We strongly support and align with the Combat Commanders', General David Petraeus Commander of U.S. Central Command (CENTCOM) and Robert Willard Commander of U.S. Pacific Command (PACOM), view on the immediate missile threat and the need of more missile defense assets to protect our soldiers and allies serving in their respective areas of operation; the Middle East and the Far East. Each and every air defense soldier in their command goes through Fort Sill.

Currently the U.S. Army has four major air defensive systems deployed to address these evolving threats. In addition, the Army is looking to add four more new systems to supplement and replace the current systems in the years ahead. One of the new systems is a constellation of "blimp like" tethered battlefield sensors called JLENS and the creation of an integration system of all the shooters and sensors in the area to effectively defeat threats. Absolutely critical for protection and handling all threats is a "system of systems" which coordinates to use any sensor, any interceptor at any time. This "system of systems" is the most critical component of regional defense outlay.

- The C-Ram System, (Naval Phalanxes and Sensors) is capable of providing early warning of rocket, artillery and mortar fire and engaging them in protection of Forward Operating Bases.

- The Sentinel is a portable, 360 degree radar providing an aerial picture of the battle space

The Patriot System is deployed as a battery that consists of four to five fire units. A battalion is made up of 4-5 batteries. Each fire unit includes down range and up range equipment. Down range equipment is made up of 8 launchers; each launcher is capable of holding four Patriot-2 Missiles or 16 Patriot-3 Missiles. The down range launchers are connected through fiber optic cable and/or electronics to the up range which consists of the 'Big Four'; the radar, the engagement control station, the communication relay, and the power plant. All of the Patriot both down and up range systems are self powered and mobile; they can be put on C-5, C-17, C-130, C-141 transport planes and have an initial capability to be deployed within 45 minutes.

One Patriot battery can defend an area of up to 20-25 square kilometers against short range, tactical ballistic missiles. 40 percent of current Patriot battalions are forward based in regional theaters such as Korea, Japan, Qatar and Bahrain.

On behalf of our membership throughout the nation, we give due respect and gratitude to Fort Sill, Oklahoma for its important part in making our nation and world a safer place.