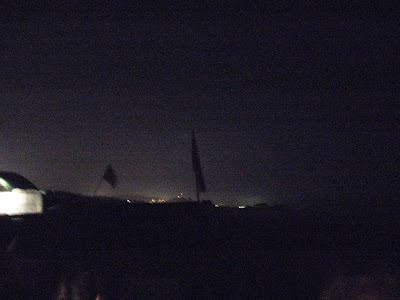 If you go to the Joongduk coast during the clear night with many stars in the sky, and quiet water in the sea where the calm water makes the row white spots by its being stricken to the rocks, you may see the deeper beauty of Gangjeong Sea where the Jeju naval base is planned. You may also hear the chorus of frogs that break the silence in the coast.
Artist Kim took the two photos here. There was a chief digital camera and these two photos were we could do best to record such beautiful night in the coast. He couldn’t take the stars but the flags the villagers set up on the rocky coast and Prof’ Yang’s tent in the night. 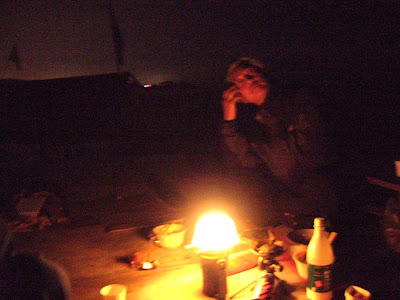 It would be really sorry if the base is set up and such landscape is gone by the base construction, Prof. Yang Yoon-Mo who has been in tent for more than eight months in this Joongduk coast said.

'[A]ctivists from Jeju, on October 18, [2008] were holding an action to oppose the construction of the Navy base on Jeju Island. Six people from a local village on the island went underwater on October 18 and held banners amongst the colorful coral protesting the base and expressing their concern that the coral life would be destroyed by the Aegis.'
Bruce Gagnon, Protesting Aegis in Maine and South Korea
Oct. 20, 2008