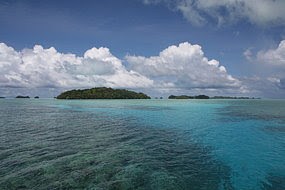 * Image source: same as the below link
PHOTO : Palau islands: territory on offer for base. [iStockphoto]

* Text informed by Koohan Paik through 'famoksaiyanfriends' list on April 28, 2010

Palau's Senate has asked President President Johnson Toribiong to offer the state of Angaur as an alternative location for the US Futenma air base in Okinawa, Japan.

The Marianas Variety reports that under the Compact of Free Association, the US military has the option to use lands in Palau.

The senators also noted that two Japanese politicians recently visited the CNMI to look at a site being considered by Japan as a likely relocation site for Futenma.

Okinawa residents are protesting at Japan's 2006 agreement to relocate the US base to a coastal part of the island.

Prime Minister Yukio Hatoyama vowed to review the agreement but has struggled to find an alternative location.
Posted by NO Base Stories of Korea at 11:52 PM