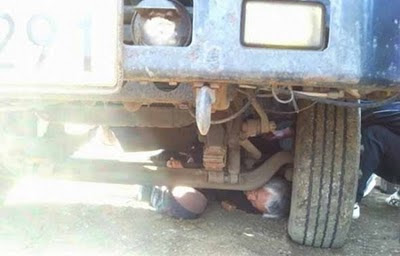 I woke up this morning to my emails and found news that Global Network board member Sung-Hee Choi had been arrested along with Yang Yoon-Mo from the Gangjeong village on Jeju Island in South Korea. Yang has been a key activist in the village struggle to stop the Navy base construction. Sung-Hee has moved to live in Gangjeong and has played a key role building international support for the overwhelmed villagers.

Apparantely Yang had tried to block a construction truck with his body and somehow got underneath the truck. When Sung-Hee heard about it she ran to the site and crawled under the truck with Yang. Knowing Sung-Hee I can see her doing just that. Already I have had emails from Koreans living as far away as Denmark so Sung-Hee's wide network of friends are speading word.

See a message below that I got from one Korean woman on Facebook.

Hi, This is Jungjoo. I have heard about you from my friends who work with different orgnization such as Life and peace fellowship and also I got to know you from Sunghee Choi. I assume you might visit Sunghee's blog sometimes. so maybe you know what has been going on in Jeju island now.Unfortunately this morning Sung-hee got arrested while she was trying to block the truck carrying stones and tetrapots for naval construction. she was laying down under the truck for a while eventually police took her to prision. I don't know exactly what happened there because I wasn't there. our community members and other activists were with her. another guy who has been protesting against naval base construction for 4 years alone also was arrested with her. we don't konw she would be setenced or be free with some fine. it is very sad she got arrested because she has been working so hard on this issue and keep updating date to date news. We do hope she could be set free soon without any fine. but Navy seems so determined this time and rushed to keeping doing construction by ignoring local people. I don't know what we should do. but Absolutely we need solidartiy and friends who can help her. please share this situation with your friends. thank you for reading this note. if you have any question, please ask me. thanks.
JungJoo Park

UPDATE: From Sung-Hee after getting out of jail:

I was just released around 12:53 am, April 7 from the Dongbu Police Station, Jeju city (A couple who manage a restaurant in the Jjeu city thankfully drove me to the village) but movie critic Yang Yoon-Mo was not released and he is still in a confinement cell of the police station. He has been once imprisoned for his former actions against naval base and this time, has been accumulated with two more charges beside today. We are planning to accelerate the struggle against the Jeju naval issue to the Pan-Nation struggle, while doing the movement for the prompt release of him. We are asking people whether the Peace Island can stand with illegal and violent entry of naval base. No.

Professor Yang and I had been locked up in the Dongbu police station confinement cell for about five hours after we were moved from the Seogwipo police station where we were carried after arrest around 9am on April 6. We resolutely claimed that the forceful construction of the naval base and arrest upon us was violent and illegal therefore we are innocent and the police station chief should make apology to us. We also strongly resisted against their moving us to the Dongboo police station. We also carried out hunger strike for a day and determined to do it more days until this illegal construction is stopped and some violent policemen are punished. Still, they charged us with the business-interruption crime. It is another process whether the prosecutors will indict us later or not.

While I was relatively gently dealt with, the arrest on movie critic Yang was really violent and inhumane. He was handcuffed with wounds in his arms and violently hit by and inhumanely dealt by some police men who even tried to hit him inside a police wagon but was restrained by a policeman. He needs the hospital check tomorrow morning with a lawyer and we will see how much degree of wounds he has gotten during the violent arrest.

Many young activists here not only helped us to spread the struggle through photos and videos but were also told to block six trucks in the morning after we were arrested. A leader in the organization called the Frontiers was told to have thrown his body under the crane as part of making efforts to prevent the construction. He was not arrested. The construction was told to resume again in the afternoon after all the people gathered in the village hall to discuss the aftermath strategy and to inform the news to nationwide media. The struggle to prevent illegal construction will go on with higher intensification afterward. We will do our best efforts and people will eventually win.
Posted by NO Base Stories of Korea at 7:32 AM