Some visitors could see Yang Yoon-Mo, movie critic who was doing a 5th day hunger strike as of April 10, in a confinement cell of the Dongbu Police Station, Jeju City on April 10. Today, as of April 11, he meets his sixday hunger strile. The interview contents and below photos on April 10 were thankfully summarized by a volunteer here.: 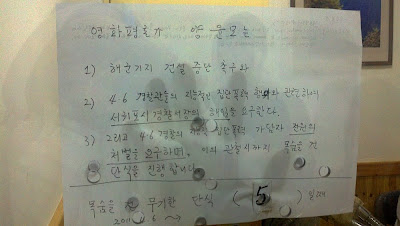 I, Yang Yoon-Mo, movie critic, am doing a hunger strike at the risk of my life in demands of: 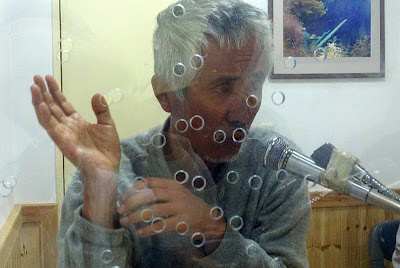 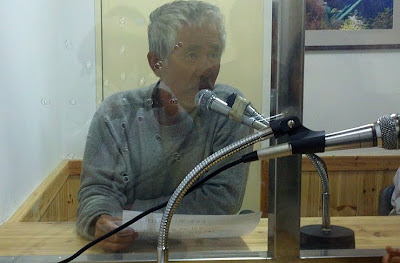 On April 8, MacGregor Eddy, a United States activist called people to call the UN HUman Rights mission for the invesigation on the violent arrest of him on April 6 and for the prompt release of him as the below:

In NY there is a permanent mission of ROK (South Korean) to the United Nations. You can call from anywhere in the world, the phone number is 212 439 4000 and ask for 1st Secretary Cho at extension 229. She is the Human Rights desk officer.

Inquire about the brutal treatment of the Jeju Islanders who are resisting the destruction of their lovely island to build a Navy base!

Ask about the condition of distinguished film critic professor Yang, who was injured by the police on April 6th. He is in jail on a hunger strike right now.

The UN mission is sensitive about human rights violations. If you get voice mail leave a message. Please call now, it will not take long. I just called them. They say they will investigate!

Posted by NO Base Stories of Korea at 6:20 AM