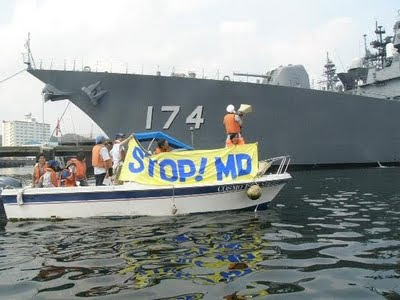 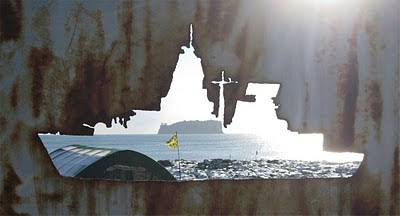 South Koreans, on Jeju Island, protest the construction of a Navy base on their environmentally sensitive island that will be used to port U.S. Navy Aegis destroyers
________________________________
Organizing Notes
http://space4peace.blogspot.com/2011/04/protest-of-aegis-christening-planned-in.html
Tuesday, April 26, 2011
PROTEST OF AEGIS "CHRISTENING" PLANNED IN MAINE

The Navy will "christen" another Aegis destroyer on Saturday, May 7 at Bath Iron Works (BIW) in Maine. Peace groups plan to hold a protest at the event from 8:30 - 10:00 am. Following the protest people are invited to come to the Addams-Melman House (212 Centre St) in Bath for a pot luck lunch at noon.

The protest is being sponsored by the Smiling Trees Disarmament Farm, Global Network Against Weapons & Nuclear Power in Space, Maine Veterans for Peace and CodePink Maine.

These destroyers, with so-called "missile defense" systems on-board, are keys to the aggressive Pentagon military strategy that calls for Aegis deployments around Russian and Chinese borders in order to neutralize their nuclear retaliatory forces.

The hard fought struggle of villagers now going on at Jeju Island in South Korea against the construction of a Navy base is linked to these Aegis destroyers as the Navy needs more ports of call for the ever-expanding fleet of these ships.

The recent cruise missile attacks on Libya, costing $1.2 million each, were launched from Aegis warships.

Studies show that spending $1 billion on military production creates 8,555 jobs. But if that same $1 billion was invested in building rail systems at places like BIW we'd get 19,795 jobs.

The public is clamoring for jobs these days. Corporations, despite huge tax cuts, are not investing here in the U.S. because they are attracted to cheaper labor overseas. So if we want more jobs in this country we've got to take our federal tax dollars, that are presently being wasted on endless war, and invest them in building rail systems, wind turbines, and solar systems at facilities like BIW.