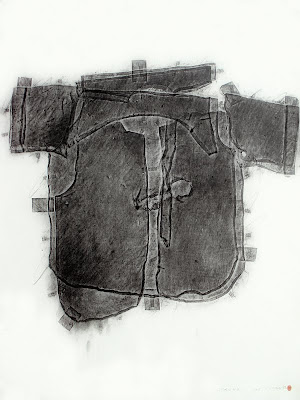 ▲ This work entitled “Released after 60 years,” by Jeju artist Koh Gill Chun is a charcoal rubbing of clothes excavated from a mass grave. Photo courtesy The artist


This is part 1 in a 2-part series.
Art has a unique ability to move people, to change minds and heal hearts. The use of art to reveal truth, make political statements and initiate revolutions is known throughout the world.

Jeju artists – visual, performance, literary – have been especially influential in the ‘Sasam’ Movement (local term for the mid-20th century period of mass killings), the urge of Jeju people to reveal the truth about the military brutality and deep tragedy of that time.

In 1979, writer Hyun Ki Young published “Aunt Suni,” a work of fiction depicting events of that era. The first of its kind, this groundbreaking book brought both recognition and persecution to its author. An English translation was published in 2008.

Han Rimwha, a novelist, poet, and independent researcher, published a three-volume novel on related themes in 1991 entitled “The Sunset on Mount Halla.” Today the president of the Jeju Writers’ Association, Han describes frequent interrogations as she researched material for her literary work.

Following the publication of her novel, Han was interviewed by more than 60 media representatives.

When asked if many writers in her association are presently focused on this poignant historical event, she replied in the affirmative. She herself has written a total of six books and numerous articles on the subject.

On April 1, the association will facilitate a conference on ‘Sasam literature’ to discuss how best to write about the tragedy and what to focus on. On the 9th, the group will hold a walk – a pilgrimage of sorts, and the first of its kind – in the footsteps of the refugees who fled to Mount Halla, for the purpose, in the words of Han, of “healing ‘Sasam’.”

The Jeju Writers’ Association, a branch of the related national organization, has more than 90 members. It maintains an office and a book cafe located in the “House of Jeju Writers” shared by the Jeju Literature Association.

The performing arts have also focused on events of this tragic historical period. A theatre company, Nori Bae Hallasan, was formed in 1987 as part of the democracy movement and continues to this day. Though investigated, the troupe avoided outright persecution by using symbolism and imagery rather than a more direct portrayal of its themes.

With performances related to the turmoil and massacres of the mid-20th century and other political controversies, this unique group travels from village to village to perform in a traditional style of theatre-in-the-round which includes audience participation.

Yoon Miran, a performance artist who has been involved with the troupe since 1989, identifies the group’s performances as consciousness-raising.

“Art can be used as a sword,” Yoon expressed, “to kill or threaten the enemy – or it can be healing.”

Participatory in nature, the group’s work encourages their audience to express otherwise dangerous or difficult emotions like anger and mourning. The company remains wildly popular to this day and also performs in Japan to the Jeju diaspora.

“Jeju has its own indigenous ways to heal,” said Yoon.

In addition to writers and performers, visual artists have been especially instrumental in highlighting this period of tragedy and injustice.

An artists’ group organized in 1988 specifically to create ‘Sasam Art.’ Its first show was held discreetly in a former “Citizen Center” near the KAL Hotel and titled “April Exhibition” as the term ‘Sasam’ (literally, ‘4.3’) was forbidden by law.

Works in the exhibit were abstract and symbolic rather than literal. Even so, it was considered to be an “extremely dangerous” act, according to art critic Kim Yu Jeong.

This show moved to a gallery in Seoul and included much more explicit works. Kim states that the exhibition was closely watched by the National Intelligence Agency, which censored and attempted to confiscate the works but was finally convinced otherwise.

Subsequent shows were held at the Min Gallery, which was located in Insadong but no longer exists. The gallery was dedicated to politically progressive art and its owner “suffered a lot,” according to Kim.

The artist group reorganized in 1991 as Tamna Artists Association, dedicated more than ever to ‘Sasam Art.’ It remains today with a large membership and sponsors an annual exhibition.

This year’s exhibit is a dramatic departure from previous ones. Artist Koh Gill Chun has reported that, in front of an audience, he will be creating a work of art on the site where the home of a leader in the resistance movement of that era once stood. A shamanic ritual of healing will also be performed. The site is now part of Hallasan National Park. 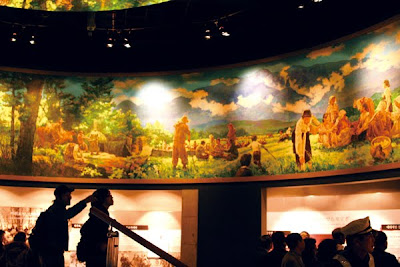 Kang Yo Bae is perhaps the most well known of ‘Sasam Artists’ and a co-founder of the Tamna Artists Association. While he also creates art seemingly unrelated to this theme, he admits that all of his work is in some way influenced by the events of that terrible time.

He identifies “emotional ups and downs,” citing this artwork work as “mentally difficult” while also acknowledging that doing such work helps to “heal” him. However he admits that he cannot sustain such a focus for long periods of time.

In 1992, Kang’s ‘Sasam Art’ was shown in Jeju, Seoul, and Daegu; the exhibition was entitled, “The Camellia Has Fallen.” According to Kim, it was considered a monumentally influential event. When the 4.3 Peace Park opened on Jeju in 2008, 50 of Kang’s works were displayed in a special exhibition bearing the same title.

Another influential artist and Tamna Artists Association co-founder is Park Gyung Hoon. An exhibition of his woodcut work, a style used by a majority of ‘Sasam Artists’ at the time according to Kim, was on display at Jeju National University in 1990.

The exhibit was censored by local police, and one work – of refugees on Mount Halla destroying the US flag – was removed.

The first significant group exhibition of the Tamna Artists Association, entitled “Sasam Exhibition,” was held in 1994. It included the works of 42 artists and showed in two locations: Sejong Gallery in Seoul, and Jeju Arts and Culture Center.

Some artists declined to participate out of fear. Public officials ordered the exhibit to close, 2 to 3 works were removed, and the remainder were then permitted to be shown.

In a public display of support considered “radical” and “shocking” at the time, according to Kim, Jeju’s then-Governor Shin Gu Bum attended and donated to the show.

Lee Eun Bang, a well known writer on themes related to the massacre, attended the show and cried upon seeing his own photo displayed. According to Kim, though Lee was profoundly impoverished, he nevertheless donated 5,000 won.

In his work, published in a unique handwritten style, Lee took a different approach than others by writing the history of the Jeju resisters. He was blacklisted by the National Intelligence Agency.

One of the most influential activist-artists today is the aforementioned Koh Gill Chun.

Koh’s work is prolific, and one of his most striking may be that permanently housed in the 4.3 Peace Park Memorial. Entitled “Death Island,” it is a grouping of 23 alto-relievo sculptures in white plaster and clay which depict the variety of victims’ tortures and deaths.

Following the discovery of a mass grave on the grounds of Jeju International Airport, Koh created another grouping of sculptures, this one of tragic life-sized figures in clay emerging from earth. It was included in the 2009 Tamna Artists Association exhibit and was entitled, “From the ashes of the earth, we stand.”

Koh describes his “shocking” discovery of US political progressive and scholar Noam Chomsky’s inclusion of this tragedy [“...the suppression of a peasant revolt in...Cheju Island”] in Chomsky’s 1992 book, “What Uncle Sam Really Wants.” He describes this as the initial motivation behind his own ‘Sasam Art’ and political activism.
Posted by NO Base Stories of Korea at 8:55 AM