Text Fwd: We Are Cornered: There's No Way Out Without A Fight 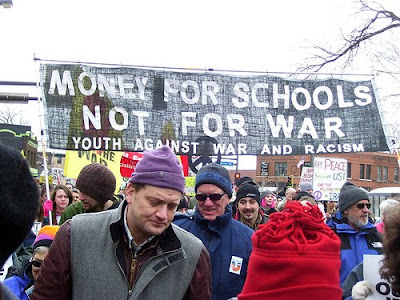 Bruce Gagnon blog
Thursday, August 26, 2010
We Are Cornered: There's No Way Out Without A Fight

There is no cavalry coming over the ridge to save the people from massed capital. Certainly not the Democrats, whose self-caged left wing now finds its marginalized encampments under lockdown by their own president’s hostile patrols, while the GOP and its Tea Party irregulars howl from the circling darkness. That’s what happens when progressives maneuver themselves onto the same side of the battlefield as Goldman Sachs, as they did with abandon in 2007-08, deliriously fighting their way into a cul-de-sac in which they are now surrounded.

The leftish brigades rallied to a commander who styled himself an incarnation of Abraham Lincoln, but turned out to be a General George McClellan, the Union’s first commander of the Army of the Potomac. McClellan was great at rousing the troops and putting his army on parade, but constantly overestimated his Confederate adversaries and, in Lincoln’s final estimation, refused to fight. The political roots of his reluctance to crush the Confederacy became clear after his dismissal when, in 1864, he challenged Lincoln on the Democratic “peace” party’s ticket. McClellan never really wanted to win the war, or, at the very least, saw victory in a very different way than Lincoln and Ulysses S. Grant.

It has long been clear that Barack Obama’s idea of victory required decisively defeating the Left of his own party. Everyone to his left is to be neutralized, while those to his right rate an open hand and endless concessions, the scenario from the very start of his health care “negotiations” with the drug and insurance industries. Victory in the racial arena means an end to race agitation, a Black stand-down, which remains largely in place. Success in war, not pursuit of peace, is his goal, one that will surely elude him, but not for lack of trying.

Obama and finance capital began an early, thoroughly vetted, and white hot love affair that was anchored in mutual contempt for those who would challenge the rule of money. He has delivered the highest return on corporate campaign investment in the history of bourgeois democracy, allowing Wall Street to pocket at least $12 trillion in return for contributions of less than $1 million per investment house. (Goldman Sachs was top giver, at $994,795.) Obama was BP’s biggest political campaign recipient: $71,000, an investment that boosted the corporation’s value by billions – albeit temporarily – when the president opened up offshore drilling in the Gulf of Mexico.

Obviously, Goldman Sachs and BP considered Obama a “greater good,” in terms of their interests, than John McCain. And they made out like bandits, confirming their assessment of Obama’s immense value to their side in the class war. The question is, how in the hell did lefties conclude that Big Capital’s and Big Oil’s “greater good” candidate was also the progressive side’s fountain of Hope – or even a “lesser evil” – in 2008? Both camps placed their bets on Obama, but only one side could possibly win.

It is the Left that wound up trapped in the cul-de-sac, with every major item on its 2008 political wish list betrayed, sidetracked, mangled or spat upon by Obama and his friends – although, to be fair to the Devil, the Left had often simply imagined they had Obama’s ear or support when such was not even remotely true. On war, for example.

Most devastatingly, Obama and his Democratic legislative allies have successfully shielded their Wall Street masters from anything worthy of the name financial reform. This means finance capital and its “shadow,” derivatives-based economy (nominally, ten times bigger than the “real” global economy) remain beyond the reach of meaningful public intervention by conventional methods. With the air knocked out of mainstream reformers’ bony chests, Wall Street is poised for a Great Offensive against the political and social infrastructure of the United States.

Producing nothing of real value, fatally hooked on ever-mounting rates of return, simultaneously divorced from and a parasite on the “real” economy, and with the executive and legislative branches in their pockets, the Lords of Capital are set to devour the entirety of the public sector – while forcing the public to finance the feast. The rallying cry is “austerity,” but the motivation is not, as New York Times columnist Paul Krugman maintains, ideological. Rather, it is hunger.

Finance capital is, at this stage of the system’s decline, incapable of reproducing itself through productive investment, and so must feed on existing producers or on the State. Since Wall Street over the decades has already broken up, consumed and exported much of the U.S. productive economy, that leaves the State and all of its parts. Far from acting as a brake on his vampire friends, Obama leads the charge on corporate hijacking of public education, and signaled in January 2009 that all elements of the safety net, including Social Security, should be “on the table” – which can only mean some form of privatization.

The pace of finance capital deterioration quickens, accelerating the timetable of the Right’s offensive. As the hunger grows, Wall Street’s servants become more aggressive and demanding, and there is nothing in the Democratic Party, as presently constituted, to stop them.

One truth remains: only a massed people can defeat massed capital. If the American Left is capable of bearing that in mind in the critical times ahead, it might just escape the cul-de-sac and make some modest contribution to the world.
Posted by NO Base Stories of Korea at 12:48 PM