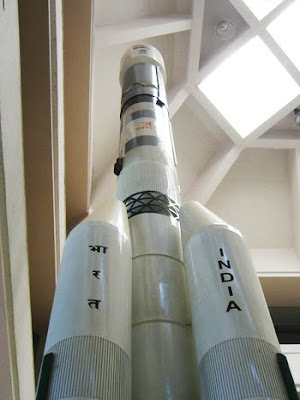 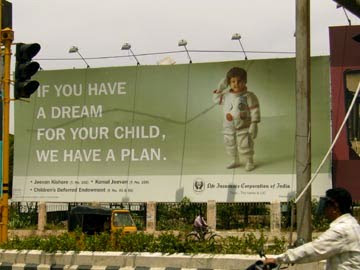 A billboard in India touting their expanding space program
* Bruce Gagnon sent on Aug. 2, 2010.
Also in his blog on Aug. 2, 2010
We heard this morning that our October international space organizing conference that was to be held in Nagpur, India will not happen. For some strange undemocratic reason, our Indian hosts had to have the permission of their government in order to hold such an international peace confab. After shuffling the Indian organizers from one government office to another, the word finally came down from the External Affairs Ministry that it could not happen.

There is likely a connection between Obama's planned trip to India next November and them turning down our conference for October. There can be no doubt that the Indian government feared angering the U.S. by allowing such a conference to happen just before Obama's trip. It is no secret that the U.S. has for several years been pushing India to develop a Space Command and to become a junior partner in the Pentagon's growing Star Wars program.

Just a month ago we published our Space Alert! newsletter which had an article by Global Network board member Matt Hoey. The article was called "India Developing Space Weapons" and the opening paragraph read:

Indian military officials have set a target date to deploy an ambitious anti-satellite (ASAT) system, according to a report released in May by the Defense Research and Development Organization (DRDO). The report, titled Technology Perspective and Capability Roadmap (TPCR), states that the "development of ASAT for electronic or physical destruction of satellites in both lower earth orbit (LEO) and Geo-synchronous orbits" can be expected by 2015.

After publication of our newsletter Matt put his article up on several international web sites and there was an immediate response from the Indian government which strongly denied that they were pursuing an anti-satellite weapons test. I imagine this sequence of events might have made the Indian government a bit more worried about the potential of our October conference to expose their space weapons development plans even further.

I must ask, what kind of government that calls itself a democracy forces NGO's wanting to hold a peace conference to have to request permission in the first place? That kind of politics sounds more like a totalitarian dictatorship to me.

The U.S. aerospace industry sees the potential of the Indian space market and drools with delight. Despite the fact that India has 300 million people living in poverty, their growing economy represents a big market for the U.S. aerospace industry. And considering that India borders China, who the Pentagon is now militarily surrounding, ensures that the U.S. military sees the Indian continent as one more key outpost in its global military empire.

Sadly, we see that India is now on its way to becoming another military colony of another declining empire. Mahatma Gandhi would be rolling over in his grave if he could see the steps that India is taking today to join the U.S. in the space militarization game.

In it's 18th year of organizing such international space conferences, the Global Network has never had this experience of one particular country essentially blocking us from holding an educational meeting. Alternatively our Indian hosts have decided to go forward and still hold a conference anyway, albeit a national one rather than international. It is good that they plan to keep expanding the consciousness in their nation about the dangerous and provocative plans and consequences of India joining the U.S. Star Wars program.

Luckily the Global Network did hold an international membership meeting in New York City this past May during the UN's NPT Review Conference. So we were able to take advantage of the fact that many of our members were in New York for those events and we could meet and share information with one another.

We will now move ahead and begin work on our annual Keep Space for Peace Week of local actions during the period of October 2-9.

You can see the poster for our 2010 space week here

Posted by NO Base Stories of Korea at 2:01 PM