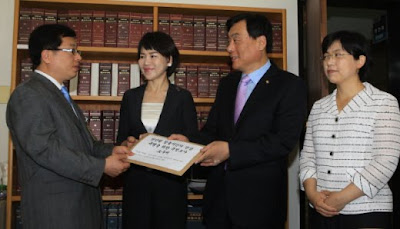 * Image source/ caption: same as the below link

'South Korean lawmakers from opposition parties including the main opposition Democratic Party (DP) submit a written request signed by 93 lawmakers for a parliamentary investigation into the sinking of the Cheonan to a National Assembly official, July 5. (Photo by Tak Ki-hyung)'

Hankyoreh
Cheonan investigation team member indicted:
Shin had been under fire by government officials for claiming that the government and military manufactured the cause of the sinking
Aug. 27, 2010
By Noh Hyun-woong

Shin Sang-chul, the 52-year-old former member of the civilian-military investigation team that looked into the sinking of the Cheonan, has been indicted without detention. Shin has claimed that the government and military manufactured the cause of the sinking.

The Seoul Central District Court indicted Shin on Thursday on charges of defamation for claiming that the government and military have been covering up the cause of the Cheonan sinking, and that the real cause was that the ship had run aground or collided with another object.

Shin has been accused of claiming that the Cheonan sank after colliding with a U.S. warship after running aground, that survivors are being pressured or detained to cover the reason up and that there were no signs to show that warship sank from an outside explosion in 34 stories, media interviews and lectures between March 31 and June 15, including a story in the Internet news site “Surprise.”

In particular, prosecutors explained, “Shin was formally indicted due to the perceived seriousness of his crime given the nature of his continued spreading of false facts even after the complaints were received and he was under investigation.”

In order to determine the veracity of his Shin‘s claims, prosecutors visited the site where the Cheonan’s hull is being kept on July 30.

“Shin claims that there are scrapes on the hull from when the Cheonan ran aground, but an on-sight investigation revealed no such scrapes,” said a prosecution official. “In order to prove his claim, which does not accord with objective reality, Shin continued to claim new false grounds.”

During an interview with the Hankyoreh, Shin said, “I have been worried that the indictment will not go through, because I will prove that the investigation team’s announcement was a lie in the courtroom, where the truth is legally uncovered.

Urgent Fwd from Korea: A Letter to Hillary Clinton, U.S. Secretary of state: There was no Explosion. There was No Torpedo.
Posted by NO Base Stories of Korea at 3:22 PM