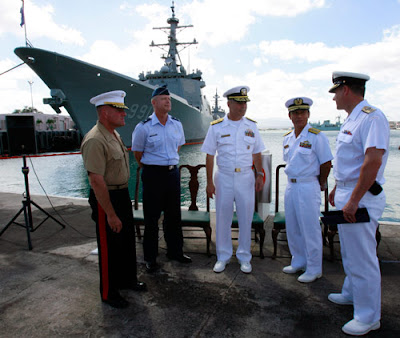 Country "Orange" ignores all diplomatic and political requests to cease operations in country "Green," and a sea battle ensues.

That was the framework for the final "free play" tactical phase of Rim of the Pacific war games Sunday through yesterday as the big 40-day maritime exercise wraps up in Hawaii waters.

RIMPAC is advertised as interoperability practice between allied nations, but real-world threats are never far behind.

Diesel electric submarines from Japan and South Korea stalked the U.S. aircraft carrier Ronald Reagan in the final phase -- simulating a growing undersea worry as nonallied nations build up their stock of quiet subs in the Pacific.

Speaking to reporters yesterday, U.S. Navy Vice Adm. Richard Hunt said the training encounters were still being reviewed, "but I will say that the Reagan did very well -- moved quickly and smartly out there at sea."

He added, "The diesels (submarines) that came are incredibly capable and presented tremendous challenges throughout the exercise. (They) provided some of the best training that we had."

Another U.S. aircraft carrier, the George Washington, was at the center of war games off the east coast of South Korea this past week as a reproach to North Korea.

Adm. Robert Willard, head of U.S. Pacific Command at Camp Smith, said July 20 in South Korea that future exercises would be held in international waters in the West Sea (or Yellow Sea) west of South Korea, which China considers to be on its doorstep, as the U.S. seeks to maintain its reach in the region.

The U.S. Navy downplayed RIMPAC yesterday in the context of world events.

"RIMPAC is something that we do every two years. It's two years in planning, and we truly have been working this in detail for the last 12 months," Hunt said. "What we are trying to accomplish with RIMPAC is training for ourselves, not necessarily sending a message, but training preparedness."

Hunt and other senior officers from the U.S., Japan and Canada spoke pierside at Pearl Harbor in front of the South Korean destroyer Sejong the Great and the Japanese destroyers Atago and Akebono.

The 32 ships participating in this year's RIMPAC started pulling back into Pearl Harbor yesterday, officials said. Closing ceremonies for the exercise will be held tomorrow.

The Marines experimented with beach landings involving smaller company forces of about 180 Marines versus a battalion landing team of about 1,100 Marines coming ashore. The goal was to evaluate dispersing Marines in wider areas.

"I won't say it was a success across the board ... but we learned some very, very important things from it," said Marine Corps Brig. Gen. John Broadmeadow. "As you take a smaller force, spread it over a wider area, you can imagine the command and control issues that you are going to have."