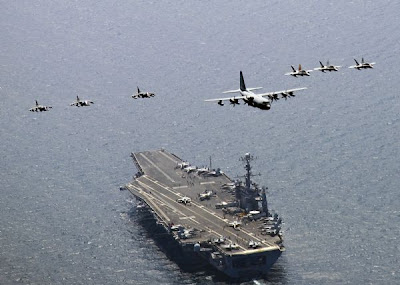 'A U.S. Marine Corps C-130 Hercules aircraft leads a formation of F/A-18C Hornet strike fighters and A/V-8B Harrier jets over the aircraft carrier USS George Washington (CVN 73) in the East Sea of Korea, July 27, 2010. The Republic of Korea and the United States are conducting the combined alliance maritime and air readiness exercise "Invincible Spirit" in the seas east of the Korean peninsula from July 25 - 28, 2010. (Xinhua/Reuters)'

-[T]he theater of the US-ROK drill was only 500 km from Beijing. Considering that the nuclear-powered super-carrier USS George Washington's radius of action is up to 600 km, and the aircraft it carries can reach a speed of 1,000 km an hour, the joint drill was dangerously close to China's security threshold.

BEIJING: General Ma Xiaotian, deputy chief of general staff of the People's Liberation Army, and Qin Gang, Foreign Ministry spokesman, recently spoke out against foreign warships entering, and military aircraft passing over, the Yellow Sea or any other offshore areas, because they pose a threat to China's security.

Their objection is justified.

Referring to China's security, Chairman Mao Zedong once said that "others should not snore beside a sleeping person". [?] China has to be alarmed when other powers display their military might near its territory. Will the US allow China to conduct military drills with neighboring countries in the Gulf of Mexico? As the Golden Rule of the ethic of reciprocity goes, "Do not do unto others as you would that they should not do unto you."

From the perspective of strategic thinking, the bottom line is to read the dangers before they appear. We should prepare for the worst and fight for the best outcome.

The opposition of the Chinese to the joint military exercise of the United States and the Republic of Korea (ROK) in the Yellow Sea is more than justified. China needs to make its strategic bottom line clear to avoid misunderstandings or misjudgments.

Geographically, the Yellow Sea is the door to the Beijing-Tianjin-Hebei region, which has important security implications for the Bohai Sea Rim, an important economic zone in China. History speaks of a war between the Chinese and Japanese navies in the Yellow Sea in 1894, when the Beiyang fleet was headquartered in Weihai, Shandong province. The painful memories of that war make the waters a very sensitive area for China and it hopes they would not be violated by foreign powers.

Media reports say the theater of the US-ROK drill was only 500 km from Beijing. Considering that the nuclear-powered super-carrier USS George Washington's radius of action is up to 600 km, and the aircraft it carries can reach a speed of 1,000 km an hour, the joint drill was dangerously close to China's security threshold.

On the Korean Peninsula's security, the United Nations Security Council has issued a statement condemning the sinking of the ROK corvette, Cheonan, but it has asked all the players involved - including the US, the ROK and the Democratic People's Republic of Korea (DPRK) - to exercise restraint over the issue.

The incident has indeed heightened tensions on the peninsula, but the joint military exercise in the Yellow Sea has created more problems for the region rather than solving them.

China has to declare its solemn stance of maintaining good international relations, especially good military ties, for the sake of its relationship with the US and because it has always worked hard to ensure a smooth development of bilateral ties.

Though General Ma has said the US Defense Secretary Robert Gates was welcome in China at a more appropriate time, he has indicated three major barriers in Sino-US relations.

The first is America's sale of weapons to Taiwan. The second is the frequent entries of US military ships into the East China and South China seas and the flying of its aircraft over them. And the third is the retraining of up to 12 issues in Sino-US military exchange by the American National Defense Authorization Act in 2000 and the Delay Amendment.

China has reacted differently to the presence of US aircraft carriers at different places, periods and purposes. In 1994, China reacted strongly to the USS Kitty Hawk's entry into China's maritime boundary. But when the USS George Washington visited Hong Kong last year, it welcomed it warmly.

The US and the ROK say the USS George Washington was part of the exercise to "deter" the DPRK. But the exercise was held in the Yellow Sea, the gateway to China, and conducting reconnaissance missions in these waters could have been part of the US agenda. America's nuclear-powered aircraft carriers have strong detection and warning capabilities, and can get vital military information.

In one word, irrespective of what the military exercise was aimed at, it was a threat to China.

The US has bandied about the "China threat theory" for some time now. But this joint military exercise proves once and for all that the US, and not China, is a threat to the world.

Fortunately, according to General Ma, communications between the defense departments of China and the US have never ceased. Let's hope the two sides establish more mechanisms to enhance communications and negotiations, which would help the US understand China better and respect its security interests and concerns. The two countries have to handle their relationship properly to prevent the crisis from escalating out of hand.

Blog site:
http://rickrozoff.wordpress.com/
Posted by NO Base Stories of Korea at 1:03 PM