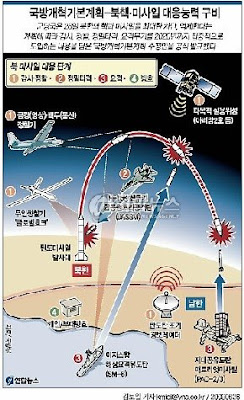 Criticism is surfacing that S. Korea’s planned defense measures against North Korean nuclear weapons and missiles, as revealed by the Ministry of Defense on Friday in its basic plan for defense reform, could be interpreted by surrounding nations like China as joining the U.S.-led Missile Defense (MD) system.

Lieutenant General Kim Ki Soo of the Joint Chiefs of Staff said that due to North Korea’s second nuclear test and missile launch, Seoul will be reevaluating its response strategy to the North Korean nuclear and missile threat to secure the fighting strength it needs. Analysts say he may be referring to the possibility of using the 2 satellites and the Global Hawk high-altitude UAV to detect signs of a North Korean missile launch, and if necessary, attacking North Korean missile bases and intercepting ballistic missiles using JDAMs launched from F-15Ks, interceptor missiles fired from the Aegis-equipped Sejong the Great-class warships , and ground-based Patriot missiles.

A Defense Ministry official said they were considering the introduction of SM-3, SM-6 and sea-based PAC-3 missiles for its Aegis ships and PAC-3 missiles as land-based interceptors.

Analysts are taking that while the Defense Ministry’s basic plan for military reform weighs the adoption of SM-3 and PAC-3 missiles in the name of preparing for the North Korean nuclear threat, it is concentrating on strengthening ground forces with additional tanks and artillery, and is postponing plans to introduce new weaponry for the Navy and Air Force.

Until now, the South Korean military has adopted or made plans to adopt less-capable SM-2 and PAC-2 missiles as part of its “independent air defense.” Experts have pointed out that if South Korea is to join the MD system, it must first purchase the SM-3 and PAC-3 missiles, capable of high-altitude missile interception at ranges of over 160km. The SM-3 and PAC-3, capable of intercepting ballistic missiles, are considered a first step to joining the MD system.

Kim Jong-dae, the editor-in-chief of the defense journal “D&D Focus,” says if South Korea introduces these weapon systems, it moves closer to the MD system regardless of its intention.

It is a matter of debate whether the SM-3 and PAC-3 missiles would be militarily useful in the security environment of the Korean Peninsula. This is because even if South Korea, whose capital is about 50km from the DMZ, were to adopt SM-3 and PAC-3 missiles, they would have limited military effectiveness against North Korean ballistic missiles, and would be of significance only against missiles flying in from long range, such as from China.

Posted by NO Base Stories of Korea at 8:41 AM