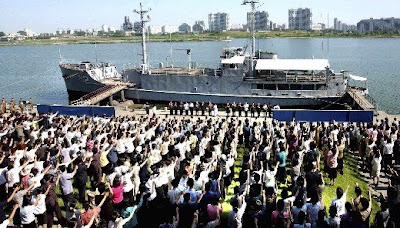 * Image source/ description* same as below:
"North Koreans participate in a rally held to commemorate the June 25 anti-U.S. Day in front of the Pueblo, a U.S. spy ship that North Korea seized 41 years ago, in Pyongyang in this June 23, 2009 picture. (REUTERS/KCNA)"

North Korea has presented its first response nine days after the South Korea-U.S. summit held in Washington on June 16. A commentator’s piece entitled “Disgusting kiss shared between a master and its dog in the White House Rose Garden” was published in the Rodong Sinmun, the official newspaper of North Korea’s Workers’ Party, and included an itemized critique of the agreements and statements on North Korea made by the two leaders. Commentator’s pieces in the Rodong Sinmun are pieces that contain policies organized at the party level, and are in effect a formal response by North Korea. However, aside from conveying criticism, the piece made no direct or specific mention of any response measures.

In reference to the summit’s agreement that the U.S. would provide extended deterrence, the Rodong Sinmun said this “ultimately merely adds greater justification for us possessing a nuclear deterrent, and it is asking for the calamitous situation of having a fire shower of our nuclear retaliation fall over South Chosun(Korea) ‘should an incident occur.’” Previously, North Korean media had claimed that its nuclear weapons were for defense against the U.S. and were not a threat to South Korea, but recently they have been implicitly suggesting that these weapons could be used towards South Korea. On Tuesday, the North Korean website Uriminzokkiri included statements saying, “Our mighty military strength, including our nuclear deterrent, is not at all simply for show,” and “The revolutionary armed forces know not a shed of mercy for those who mess with its autonomy, and the Lee Myung-bak administration cannot be an exception.”

In reference to the discussion of sanctions against North Korea, the newspaper said “The U.S. and others are going on about financial sanctions and making a lot of noise as though we cannot develop satellites or nuclear capabilities if our line of money is cut off.” The newspaper added, “However, we have in place everything we need to strengthen the nuclear deterrent, and in terms of uranium ore alone, we have the world’s largest deposits.”

In reference to the potential of five-party talks that leaves North Korea, the newspaper declared, “The six-party talks are already a shattered bowl, and ‘abandoning nuclear capabilities’ has long since been a thing of the past.”

Referring to the stipulation of “unification based on principles of liberal democracy and the market economy” in the South Korea-U.S. joint vision, the newspaper said, “President Lee Myung-bak is showing that not only has he not changed a whit in his anti-republic confrontational policy, he pursues it even more villainously with each passing day.”

The newspaper also called President Lee’s references to the Kaesong (Gaeseong) Industrial Complex a “repudiation of working-level meetings” and a declaration that he would “ultimately trample the June 15 Joint Declaration and thrust North-South relations into a confrontation.”

The newspaper also criticized President Lee’s choice of a date for his U.S. visit, saying, “The traitor Lee Myung-bak went through all possible dates and chose to go see his master on June 15, the anniversary of the announcement of the North-South Joint Declaration.”

The newspaper also indicated dissatisfaction with U.S. President Barack Obama by saying, “Seeing the new master, who makes a lot of noise about change and espouses a distinction from the Bush administration, putting his own stamp down (on President Lee) recalls a Chosun saying that ‘Green is the same color.’”