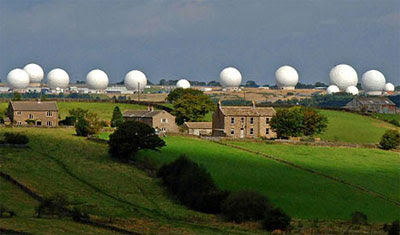 * Image Source/description: same as below
'The NRO operates a number of ground stations, including this one in the UK, that until recently it would not even acknowledge existed.'

In the 1950s, when the United States began developing its first reconnaissance satellite, Air Force planners and Lockheed engineers faced numerous technological challenges. What they wanted was a satellite that took pictures over the Soviet Union, developed the film onboard the satellite, scanned it with a device similar to a fax machine, and then beamed the imagery to the ground. Because of security concerns, they decided to only beam the signals to the ground inside the continental United States, and so they began planning for three ground stations—one in the northwest, one in the northeast, and one in the middle of the country, at Strategic Air Command Headquarters near Omaha, Nebraska.

According to an October 23, 2008 note from the NRO’s Director of Security and Counterintelligence, the “fact of” the NRO’s operation of three “Mission Ground Stations” could be acknowledged “as an unclassified fact.”

The plan ultimately did not work. As anybody who has tried to e-mail high-resolution scanned photos knows, photographs are full of data and suck up bandwidth. As the early reconnaissance satellite program went forward, it soon became apparent that each satellite could beam no more than two to thee dozen photographs to the ground each day, half of them obscured by clouds—nowhere near what was necessary to cover the Soviet landmass. The limitations were the narrow bandwidth then available from radio, the short amount of time that a satellite would actually be in range of a ground station, and the small number of ground stations. So they abandoned this approach in favor of satellites that returned massive numbers of pictures to the ground on film—like getting an encyclopedia via snail mail instead of e-mail.

Two decades later the techno-spooks solved these problems. They did so in a variety of ways, including using higher frequencies (hence more bandwidth), data compression, and most important of all, the use of relay satellites in higher orbits. The imaging spacecraft in its low orbit could take its pictures and beam them up to a higher satellite that then beamed it to the ground, thus increasing the amount of time that a satellite could transmit its imagery.

Of course the ground station segment was still important and for security reasons the National Reconnaissance Office, the agency that operated the satellites—and the ground stations—kept its association with various satellite control stations both in the United States and around the world secret, even after the NRO became public in the early 1990s. That has now changed, slightly.

Last October, with little fanfare, the NRO declassified the fact that it operates three ground stations within the United States, located near Washington, DC; Denver, Colorado; and Las Cruces, New Mexico. Although they declassified that fact, it has not become public until now. A source recently provided a declassified memo that outlines the declassification of these facilities. (You can download it here.)

According to an October 23, 2008 note from the NRO’s Director of Security and Counterintelligence, the “fact of” the NRO’s operation of three “Mission Ground Stations” could be acknowledged “as an unclassified fact.” However, the security director cautioned that “program specific information and associations will remain unclassified and unchanged.” In other words, nobody will tell you what goes on at these stations. The NRO also revealed its “presence” at the Royal Air Force Facility Menwith Hill, near Harrogate in the United Kingdom, and the Pine Gap facility near Alice Springs, Australia.

What exactly prompted the declassification of the “fact of” these facilities remains unknown. But it undoubtedly had something to do with making them more accessible to more civilian and military personnel.

Of course, these are not really stunning revelations. The use of these facilities as downlinks for intelligence data collected by American satellites has been reported for decades, and has appeared in such books as William Burrows’ Deep Black (1987) and Jeffrey Richelson’s America’s Secret Eyes in Space (1990). During the 1980s, Menwith Hill, whose large white domes dominate the picturesque English countryside like some alien mushroom field, served as the site of numerous protests by Britain’s nuclear disarmament movement. The Las Cruces site is collocated with NASA’s Tracking Data Relay Satellite System (TDRSS) ground station on the White Sands Missile Range. TDRSS has long included “national security customers” in its operations. The NRO also operates its own fleet of data-relay satellites in both geosynchronous and highly-inclined orbits. The White Sands site grew significantly in recent years and has a lot of parking spaces outside its buildings.

What exactly prompted the declassification of the “fact of” these facilities remains unknown. But it undoubtedly had something to do with making them more accessible to more civilian and military personnel, probably those involved in aspects of homeland security. That was illustrated last July when the NRO also declassified the “fact of” its operation of radar satellites, something that had also been known for two decades. For quite a few years now the US military has been seeking to develop a new class of radar satellites to detect moving targets like tanks and trucks on the ground—as opposed to the NRO’s satellites, which essentially take radar images of small areas. Problems arose because the NRO did not even admit that it operated such satellites. Everybody involved in discussions over developing a new series of such satellites had to obtain a special security clearance simply to talk to somebody from NRO, even if the NRO systems’ technical details were not going to be discussed. Secrecy got in the way of progress at developing military capabilities.

The NRO will now acknowledge that it operates, or has a “presence” at, these ground facilities. Maybe they will even put a sign up on their gate. But don’t bother knocking at the door; they won’t let you in.

Dwayne Day can be reached at zirconic1@cox.net.
Posted by NO Base Stories of Korea at 6:11 AM