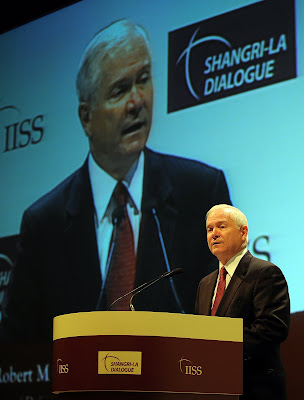 * Text informed by Corazon Valdez Fabros on May 31, 2009
* Image source/ description as the site below*

The annual conference gathers defense, senior military and other officials from across the region to discuss mutual security challenges.

“America has paid a significant price in blood and treasure to fight aggression, deter potential adversaries, extend freedom, and maintain peace and prosperity in this part of the world,” Gates said. “Our commitment to the region is just as strong today as it has ever been, if not stronger, since our own prosperity is increasingly linked with yours.”

Gates said the challenge now is to fashion defense policies that adapt to the new realities of the region. He cited the long-standing treaties with Japan and South Korea, both formed in the early years of the Cold War “when both nations were impoverished and virtually destroyed.” Now, Gates said, the countries are economic powerhouses with modern, well-trained and well-equipped military forces.

As a result, the United States is making adjustments in its policies to maintain a posture that is more like that of a partner, Gates said. South Korea will take the lead role in its own defense in 2012. The U.S. military presence in the Pacific is growing, Gates added, noting increased relationships with India and China.

The secretary said the changes represent a shift in the defense strategy in the region, placing more emphasis on building the capacity of its allies and less on solely conventional military deterrence. The shift will represent a more balanced mix of “soft” and “hard” power, he added, with military, diplomatic, economic and humanitarian elements integrated seamlessly.

“It is an approach intended to further strengthen and deepen security in the Pacific Rim through maintaining our robust military presence, but also through strengthened and deepened partnerships,” Gates said.

The secretary noted the unity in the global responses to the economic crisis, the threat of a pandemic flu and piracy. Despite occasional differences of opinion, he said, nations overall have come together to develop unified responses.

Gates said that stronger relationships among countries in the region are the key to facing security challenges such as piracy, weapons proliferation and terrorism, and that the U.S. administration promises a more collaborative and consultative foreign policy.

“What these challenges all have in common is that they simply cannot be overcome by one, or even two countries, no matter how wealthy and powerful,” Gates said. “While the United States has unparalleled capabilities, we also recognize that the best solutions require multiple nations acting with uncommon unity.”

Posted by NO Base Stories of Korea at 1:24 AM