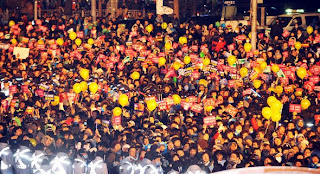 'S. Koreans ring in the New Year with candlelight revival

Over 100,000 citizens demonstrate against passage of controversial bills

The candles that lit up the summer of 2008 burned brightly up until the last day of the year. Amid the chaos created by the Grand National Party’s attempt to push through the so-called “MB (Lee Myung-bak) vicious laws,” citizens carried candles and gathered everywhere, including the Bosingak bell tower in Seoul’s Jong-no, where a New Year’s Eve bell-ringing event was being held.

With crowds of over 100,000 citizens gathered at the site of the event Wednesday around the Bosingak area, a candlelight demonstration in opposition to the forcing through of the “MB vicious laws,” including several media-related bills, took place beginning at 7:00 p.m. Among the thousands of participants in Wednesday’s demonstrations were citizens and members of Internet meeting sites such as the Anti-MB Cafe, the Society of Candlelight Demonstration Arrestees and the Citizen Action to Eradicate Traitorous Groups, as well as members of the Seoul chapters of the National Union of Media Workers and the Korean Teachers and Education Workers Union (KTU, Jeon Gyo Jo). Together with citizens participating in the bell-ringing event, these groups held an event, using candles to write the words “Self-destruct traitorous dictatorship Rat National Party” on the road to criticize the president and the GNP’s legislation drive.'

Posted by NO Base Stories of Korea at 9:55 PM