Jeju Naval Business Committee: Construction Set to be at the End of March, and Construction for the Harbor and Bay to be Started around June 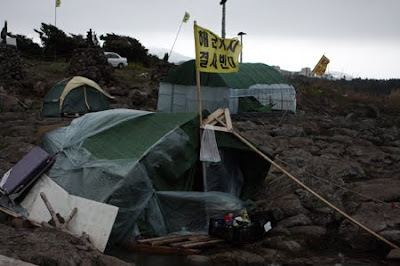 Image source: Kim Kyung-Duk, Seogwipo Daily Newspaper, March 4, 2010
'Shall the Spring Come to Gangjeong?:
[Report] Visiting to Gangjeong Village before the Ceremony for Naval Base
“ Even though, this tent vigil is very hard, we cannot have the spare to concern about farming.”'

'The villagers are setting the tents even in the planned area for the ceremony to set to work
on the naval base and doing the tent vigil.

'The roads are so stuffed and filled with the placards and flags of such as, ‘Please keep Gangjeong’,
‘ [We death-defiantly] oppose the naval base’, and ‘Withdraw the naval base [plan] of the great environment damage’. The peaceful good-water & land of the village landscape has gone.
Only the tension that would burst out whenever, is flowing, along with Gangjeong stream.' 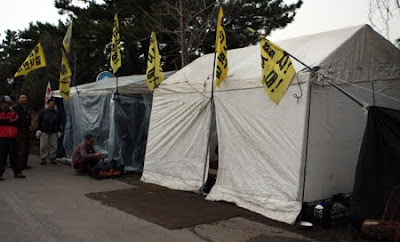 Image source: same as the above link

# 'The villagers are setting the tents even in the planned area for the ceremony to start to work
on the naval base and doing the tent vigil.

'The villagers live at tent 24 hours, make-shifting by 4 ~5people as one team each time.
A villager (54) still clearly remembers Jan. 18 when the police indiscriminately took away the protesting villagers,
to prepare the ceremony to start to work on the construction of the naval base.

“I can not forget my stunned heart when the innocent ordinary people without any crime for their whole life time,
were helplessly being dragged. The elder women and men are still suffering for the pain in their waists and heads
due to shock at the time.” The hardest thing is the apathy of people...
he says that the villagers’ basic request to stop the ceremony
at least until the result of lawsuit has been totally ignored.' 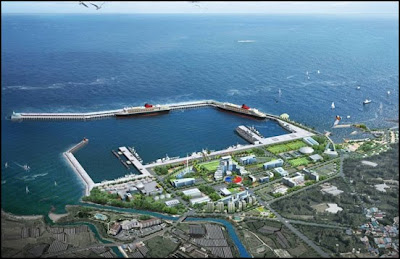 * Below are the arbitrary translations of the most parts of the two articles of Sisa Jeju and Seogwipo Daily Newspaper on March 4, which were combined together for compensating the contents each other.

Despite the Villagers’ Resistance, the Naval Base is Being Steadily Prepared
: The Navy [has Requested] the License for Reclamation on March 3, and the Approval for the Realization Plan on March 4
: Villagers Demand, “Stop it Until the [Result] of the Administrative Lawsuit."
March 4, Thursday, 2010
Kim Kyung-Duk (tree (at)seogwipo.co.kr)

The license for the reclamation of the public sea for the [planned] Jeju naval base, was given by the Busan Regional Maritime Affairs and Port Office and it is prospected that the setting for business [on the naval base construction] is to be done in the fist half of the year.

The navy has officially requested the Busan Regional Maritime and Affairs office [on March 3] to approve the license for the reclamation, as the procedures such as opinion collecting from the Jeju Island assembly on last Nov. 8 and regional coast management review meeting on last Dec. 22, had been done.

The reclamation would be done with the size of 36,9605 m2, around the coast area of Gangjeong village, Daechun-dong, Seoqwipo city. The navy announced its aim of the reclamation through the request letter, by saying that, “Because of the reason that the dredging would be difficult due to the character of the basalts inside the Gangjeong area and for the reason to reduce the environmental effect, the reclamation of the public sea to the area point to secure the needed depth of water for the vessels is necessary.”

The Jeju naval base business committee, visiting the Island Hall press interview room on March 4, and saying, “The license for the basic plan, was given by the Busan Regional Maritime Affairs and Port Office”[*on the same request day of March 3, according to Seogwipo newspaper], announced that, “We will enter the procedure for the approval of realization plan in time [*on March 4, according to Seogwipo newspaper].”

The business committee’s plan is that, because all the conditions for construction of the harbor and bay are completed once the realization plan comes out at the end of March, it can set to work at latest in June, after the preparatory period including such as installing the makeshift office.

However since the Gangjeong village people have kept demanding to step the construction procedures at least after the result of administrative lawsuit procedures related for the naval base, the resistance from the villagers are foreseen.

The business committee had announced that, “ Since it is related to the compensation issue, we predict the setting at the end of June. However, because, if the land compensation is done fast, it could be started earlier, we cannot give the clear date to set to work now.”

As the license for the reclamation of the public sea has been given, the procedures for the Naval base construction remained are those of the approval for the realization plan and compensation for land & fishing.

However, after the press report as above, the business committee saying that it is seeing the setting time as the end of March when the related procedures for the naval base is finishing, explained that there had been a misunderstanding about the setting time.

“The business committee saying, “ The navy headquarter is foreseeing the setting period as from the end of March when the related procedures would be finished by then and the office construction is started at the site of the ceremony for the starting to work on the construction of the naval base” elucidated that “We mean the June would be the time when the active construction for harbor and bay would be started.”

However, the Gangjeong villagers demand to postpone of the drive for the naval base at least until the result of the administrative lawsuit of ‘confirmation on the cancellation of the approval disposal on the national defense/ military facility business realization plan’ [* Its trial would be March 25 and its result would come out around April 14, according to the Gangjeong mayor].

Mayor Kang said that, “ Currently, the lawsuit related to the naval base realization plan has been kept to be postponed and it is right from the point of procedures, to stop the drive for the naval base at least until the result comes out.”

When the Jeju Island Assembly has passed the ‘bill on the opinion review on the reclamation plan of the public sea’ last Nov., it attached the collateral opinion that, “ The procedures have to be done after the administrative lawsuit," as well.

The Island personnel says, “ Because the [issue on the] absolute preservation area has already been dissolved and the collateral opinion by the Island Assembly is not enforcing, the procedure for the ‘reclamation of the public sea is normally being driven.” [* The villagers made the lawsuit for it, too, see HERE.]

* For More News Update, Please see HERE.
Posted by NO Base Stories of Korea at 10:29 PM