Jeju Update: [Report on Dec. 21] Workers in front of the planned naval base area 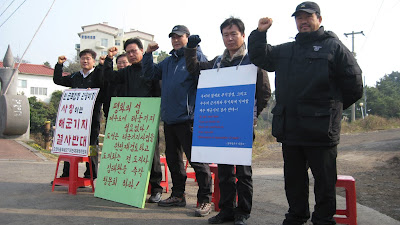 *The signs read
: No Naval Base that masks with the name of the civilian-military complex tour beauty harbor
-Committee against the naval base, Gangjeong Village People’s Council
: No need of a naval base in the Jeju, Island of Peace!
The Island government should reexamine the naval base business from the beginning !
And the Island Assembly should immediately hold a hearing on the former Island governor !
: No Jeju Naval Base from our bloody tax which will contribute to arms race and militarization and weaponization of Space!
______________________________________________
On Dec. 21, the people in charge of the Pan Island Committee’s tent sit-ins were the members of the Korean Confederation of Trade Unions, Jeju Island branch (http://jeju.nodong.org/) that is belonging to the Pan-Island People’s Committee for the Prevention of the Jeju Military Base and for the Realization of the Island of Peace. Including the two bus driver workers of the labor union of the Dongseo transportation company, who have been in their own vital sit-ins for near a month to win their demands of increasing labor days (currently only about 10 days a month) and wage, seven members of the KCTU, Jeju Island branch (above photo) came to the Gangjeong village. And the KCTU, Jeju Island branch has been carrying the solidarity sit-ins in its tent, in the City of the Jeju, to settle the matter of the labor oppression such as in Dongseo transportation company, the Jeju Clinic, headquarter of the Culture Promotion, and Woosung Apt. The seven workers standing with signs, despite cold wind, in front of the gate of the makeshift building of the planned naval base area from 10am to 5pm, expressed their will of the solidarity against naval base like the peace activists yesterday.

Even though the villagers had no spare because of their busiest harvest season, some villagers encouraged the courageous workers of the KCTU, presenting them with the tangerines that they themselves had raised in their farms. Otherwise, the day before yesterday, a senior in the Gangjeong village has scolded the people who came from the Daerim Industry and its subcontract companies that, “If you want to be the beloved companies from the citizens, you should not accept the business contract that you are not welcomed from the local residents.”

As on the date of Dec. 20, lots of the Olle tourists who passed the protesters were not stingy of their encouragement to them and agreement on the struggle. There was NO one who was in favor of the naval base and many people positively answered to the request of the solidarity signing for the struggle against the naval base, in the Joonduk coast. There were the Korean Broadcasting System reporters yesterday and they were very favorable to the struggle as well (I let you know as I missed this part as well in yesterday’s report)

Today, the navy carried a folk lane, a truck uploaded with wire meshes, and a truck uploaded with molds. The village people’s council has negotiated with the navy on Dec. 20 that no more materials could be entered from Dec, 22 at least until Dec. 27 when the villagers’ response measure would be decided in its general meeting. The villagers’ council had planned to decide its direction regarding the matter of the naval base on Dec. 17 but as their opinions could not become to be narrowed despite the long hours of the 4 and half hours’ meeting on the day, has announced to hold its meeting again on Dec. 22.

Currently, a series of the insincere formal acts by the new Island governor-Woo Geun-Min, his announcement of decision on the enforcement of the naval base construction-which was at the end of November- and his steps afterward have rather helped to heat again the worn-out village’s will of struggle, which has been some stagnated after the Gangjeong village council’s own proposal to the Island government, in which the villagers requested the Island government’s consideration of the reselection on the naval base location. Even though the decision of the Dec. 15 court on the villagers’ lawsuit in which they demanded the annulment of the cancellation of the absolute preservation area was the unjust dismissal of the villagers (the plaintiffs)-being reasoned of their improper qualification as the plaintiffs- has some frustrated the villagers, it seems active measures are being raised again among the villagers. And the Pan-Island Committee’s recent active steps and the Catholic priests’ daily peace mass in the joongduk coast are helping to revive again the villagers’ will of struggle, as well. Therefore, the villagers’ general meeting on Dec. 22 could be the momentum for the villagers to strongly recover their hopes for struggle. We ask you to continuously pay attention to the situation of the Jeju Island.

Otherwise, Bruce Gagnon, Secretary of the Global Network against Weapons and Nuclear Power in Space, briefly informing the situation of the Jeju Island in his blog, thankfully requested the readers to call the South Korean embassies in their countries and to demand the stop of the naval base construction in the Gangjeong village, Jeju Island. Please refer to HERE.
Posted by NO Base Stories of Korea at 7:03 AM